TEHRAN (defapress) – An Iranian deputy defense minister called for the development of space-based radars inside the country.
News ID: 82590 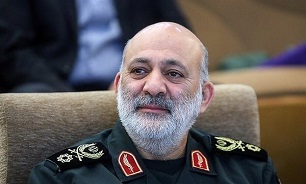 In comments at a conference on radar and monitoring systems on Saturday, Brigadier General Qassem Taqizadeh said Iran will have to employ space-based radars sooner or later.

He called for the development of the space-based radar technology in the country’s scientific centers and preparation of the ground for such technical know-how to prevent a “strategic” surprise.

Hailing Iran’s progress in radar technologies, the general said local experts have manufactured a broad range of phased array passive and active radars and have strengthened the country’s capabilities in the electromagnetic sphere.

“We are trying to thwart the enemy’s electromagnetic onslaught,” Taqizadeh said.

In remarks in October, Commander of the Islamic Revolution Guards Corps Aerospace Force Brigadier General Amir Ali Hajizadeh said Iran is one of the ten best manufacturers of military radars in the world.

He said the new radars, manufactured by the IRGC Aerospace Force, are capable of detecting stealth aircraft within a range of 350 kilometers and all other targets within a distance of above 1,000 km.