TEHRAN (Defapress) - Stating that reaching a good deal is available in the short term, Amir-Abdollahian said that the practical, positive and constructive proposals presented by Iran have paved the way for such an agreement to be reached quickly.
News ID: 83838 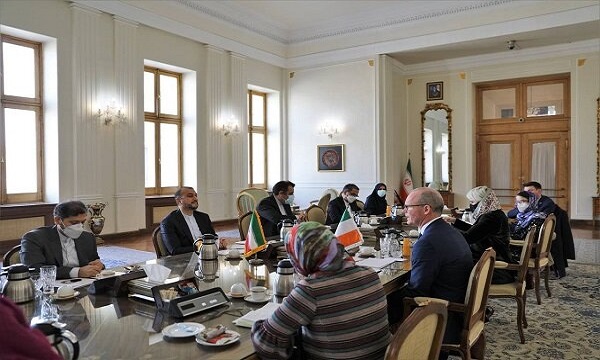 "If the American side and the three European countries [to the Vienna talks] are serious about returning to fulfilling their obligations under the JCPOA, a good agreement can be reached in a short term," Iranian Foreign Minister Hossein Amir-Abdollahian said in his joint press conference with his Irish counterpart Simon Coveney on Monday.

"We look forward to reaching a good agreement, and we are confident that the practical, positive and constructive proposals presented by the Islamic Republic of Iran have paved the way for such an agreement to be reached quickly," he added.

He also noted that the Western parties must show their true intention to return to their full commitments under the JCPOA instead of playing with text and time.

"We are in a hurry to reach a good agreement, but within the framework of rational negotiations and achieving the rights and interests of our people," the Iranian minister said.

Elsewhere in his remarks, Amir-Abdollahian pointed to the Irish Foreign Minister's concern about Iran's nuclear program, saying, "Iran's nuclear program is a completely peaceful program, and what created the main problem in the implementation process of the 2015 agreement was the inaction of the European side and the withdrawal of the American side from the JCPOA."

Simon Coveney, for his part, said that the Revival of the JCPOA can be in the interest of the Iranian people. The agreement in Vienna can pave the way for further regional and international cooperation.

Ireland wants to help all parties move the negotiations forward and bring them to fruition, he added.

Stating that he knows that Iran is outraged by the previous decisions of the US government, he expressed confidence in the will of the Western parties to revive the JCPOA.