TEHRAN (Defapress) - The resigned and fugitive Yemeni president Abdrabbuh Mansur Hadi stepped down from power and announced the formation of a presidential leadership council on Thursday.
News ID: 84025 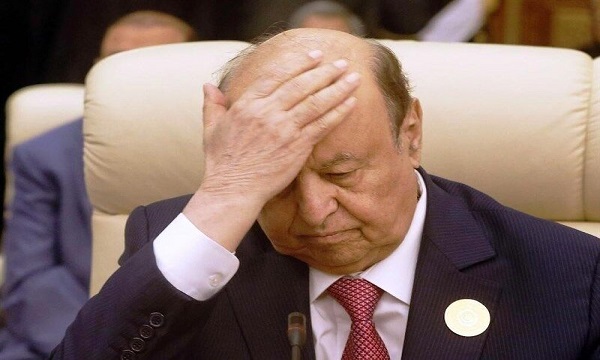 Hadi said he has sacked his deputy and transferred his own powers to a presidential leadership council as Saudi Arabia urged him to begin talks with Ansarullah Movement in Yemen to end the country’s devastating war, Al Jazeera reported.

He said on Thursday that the new body will assume the duties of both the president and his deputy.

“I irreversibly delegate to this presidential leadership council my full powers,” Hadi said in a televised statement early on Thursday, the final day of peace talks held in Riyadh, Saudi Arabia’s capital.

According to the report, Rashad Mohammad Al-Alimi will chair the Presidential Leadership Council. Meanwhile, resigned Yemeni President is said to have fired his deputy Ali Mohsen al-Ahmar.

The Presidential Leadership Council is responsible for negotiating a ceasefire with Ansarullah movement. Earlier, some reports said that Saudi Arabia ousted Mansur Hadi from power.