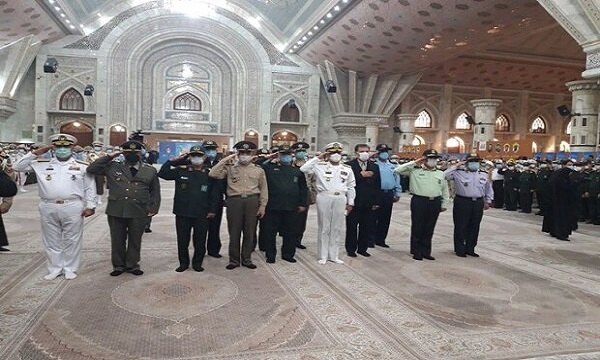 Rear Admiral Habibollah Sayyari made the remarks on Tuesday in a ceremony where senior commanders of the Armed Forces of the country went to the Mausoleum of Imam Khomeini (RA) to renew allegiance with the ideals of the late founding father of the Islamic Revolution on the occasion of the anniversary of the 'Liberation of Khorramshahr'.

Sayaari first expressed his condolences on the recent assassination of IRGC member Martyr Sayyad Khodaei and said that enemies mistakenly think that they can tarnish the real image of the Islamic Revolution of Iran at the international level while the noble nation of Islamic Iran has foiled malicious conspiracies orchestrated by the enemies against the country.

Stating that malicious plot of the enemy was thwarted by warriors during the eight years of Sacred Defense (Iraqi imposed war against Iran during 1980-1988), especially in the great epic of resistance of people in Khorramshahr.

The Liberation of Khorramshahr is the conquest of values of the Islamic Revolution since safeguarding Islamic and religious values is of paramount importance in the country, he emphasized.