Iran to remain heart of Axis of Resistance

TEHRAN (Defapress) - Seyyed Hassan Nasrallah, Secretary General of Lebanon's Hezbollah, said on Ashura Day that Iran, under the leadership of Imam Khamenei, to remain the heart of Axis of Resistance.
News ID: 84370 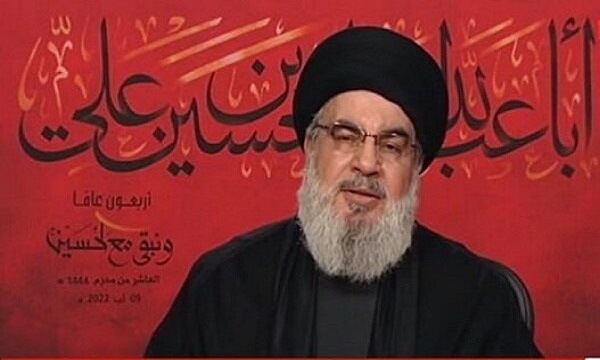 Seyyed Hassan Nasrallah addressed mourners in Dahiyeh on Ashura Day during which he offered condolences to Imam Mahdi (a.j.) and Muslims on the martyrdom anniversary of Imam Hussein (a.s.), according to the Al-Manar English website.

He hailed people in Lebanon for mass participation in Ashura ceremonies, saying "Throughout 40 years you haven’t abandoned Imam Hussein (a.s.)"

Nasrallah renewed allegiance to Imam Hussein (a.s.) and said, "From our battlefields across our region we say at your service O Imam Hussein."

Later in his speech, he condemned the Nigerian police for killing Shia mourners and hailed Nigeria’s Sheikh Ibrahim Zakzaky.

"We voice sympathy with this oppressed man," he added.

He went on to point out, "Palestine is our central cause, we are committed to standing by Palestinian people," adding that "Palestinian people are fighting in Gaza and Nablus, impose equations on Israeli enemy".

Nasrallah slammed the Bahraini regime for normalization with Israel, and for attacking Ashura ceremonies.

The Hezbollah chief also said that the people of Yemen personify Karbala, adding that supporting them is a duty.

As regards Iraq, he called on Iraqis to solve their disagreements in a bid to foil foreign schemes.

With regard to Syria, he said that the country has overcome the universal war and now faces a blockade.

Elsewhere, he said, "Iran, under the leadership of Imam Khamenei, to remain the heart of Axis of Resistance."

He also pointed to the situation in Lebanon and said "Throughout 40 years in Lebanon, we have faced all forms of wars, blockade and assassinations."

"We look forward to powerful Lebanon which is capable to defend its sovereignty and wealth.

He called on the Lebanese sides to exert joint efforts in order cope with recent crises, urges officials to feel with the pains of people.

"On the issue of gas and maritime border we are waiting for the responses to Lebanese State’s requests, but I tell you that we have to be ready for all options."