most visited
عمومی << Home Page
A few minutes ago;

The head of the Turkish Army headquarters met with the Chief of Staff of the Armed Forces of Iran.
News ID: 66095 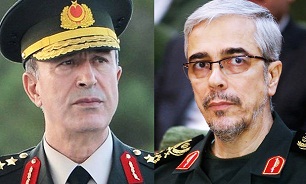 The Turkish Army Chief of staff and the Board comes on arrival to the General staff of the armed forces with the recitation of the holy martyrs of trends towards fathah anonymous sacred defense era tribute.

In the continuation of the Turkish Army Chief of staff major general Bagheri and on regional developments and the security of the shared border dialog.

Also, this journey of different dimensions is important because, in addition to the reviews of ایعاد and defense cooperation and military fields between the two countries armed forces, Iranian and Turkish military authorities regarding the most important issues of the region together to dialogue. The cooperation between the armed forces of the two countries in counterterrorism operations continue with the implementation of the ceasefire in the areas of reducing tension in the country, Syria, including the important items.

The next topic of discussion is the Kurdistan referendum that both countries take action to condemn referendum in northern Iraq and on the territorial integrity of Iraq and the implementation of the Constitution and the axis of the dialogues and negotiations between the Government of Iraq the people of Kurdistan.

The forecast would be bilateral talks Iran and Turkey results in dealing with challenges, especially terrorism is very decisive.