TEHRAN (defapress) – The US has adopted a hypocritical policy towards the Iraqi Kurdistan Region’s plan to secede from Iraq, Iran’s Judiciary chief deplored, saying Iran, by stark contrast, has explicitly opposed the secession bid which is part of plot to sap the strength of the Muslim nations.
News ID: 66257 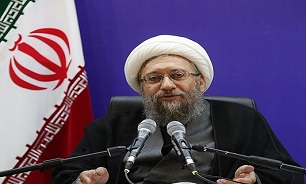 Addressing a high-level meeting of Judiciary officials in Tehran on Monday, Ayatollah Sadeq Amoli Larijani slammed the Kurdistan Regional Government’s move to hold an independence referendum as part of a new plot hatched by the hegemonic powers, particularly by the Zionist regime of Israel, to create turmoil in the region.

Expressing regret that the Kurdistan region has fallen into that trap, the top Iranian judge said the Iraqi government and all other parties are against such secession plan.

He further denounced the US hypocritical stance on the Iraqi Kurdistan Region’s controversial vote of independence, and reiterated Iran’s outright opposition to disintegration of the neighboring countries.

"We regard the Iraqi government as a unified and integrated one, and the Kurdistan Region’s authorities should be aware that they will get nowhere in the path to disintegration,” Ayatollah Amoli Larijani added.

Iraq’s Kurds rushed headlong into a vote for independence on September 25, although neighbors and countries in the Middle East, including Iran and Turkey, voiced opposition to the vote and supported the Baghdad central government.

After the controversial vote, thousands of Kurdish people in favor of Kurdistan Regional Government’s secession from Iraq took to the streets in Erbil, with some waving Israeli flags to celebrate.