Chief of staff of the armed forces, their presence in Syria aims to emphasize the coordination and collaboration on the way to deal with common enemies, the Zionists and the terrorists.
News ID: 66524 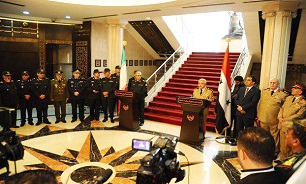 Defapress reprted,To strengthen the cooperation of Iran and Syria to deal with terrorism, Zionism, the official Syrian News Agency by (SANA) have been quoted. Mohammad Bagheri, Chief Commander of the Islamic Republic of Iran detained, after a meeting with his Syrian counterpart in Damascus, stated:

He said: we're in Damascus on the collaboration and cooperation of our common enemy, we deal with the Zionist regime and the terrorists said.

Gen Bagheri also said: we have ways to strengthen relations in the future, we will discover a broad plan and for this we will create a partnership.

Chairman of the Joint Chiefs of staff of the armed forces of the Islamic Republic of Iran said the Zionist enemy to attack opposition to Syria and Syria's emphasis on integrity.