Decommissioning terrorist in the region, a team of chaldiran

The successor to the Chief Commander of the revolutionary guards said the motto of 40 years ago, Imam Khomeini (RA) who have commented, "the United States cannot do no wrong" today has been proven operational and for the world. Tags: Martyrs Memorial , National Indicators ,Martyrs of the Shrine of the Shrine , Shrines of Kermanshah
News ID: 66681 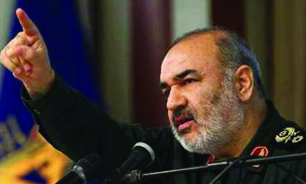 Public relations camp Hamza Hossein (PBUH) ground forces said in a statement in the wake of receiving news and information based on the flaw a terrorist team affiliated to the global arrogance to the General area of chaldiran in West Azerbaijan province on the evening of Wednesday and to deliver two of the indigenous people, team Operating the camp Hamza Hossein (PBUH) ground force that guards in the region attended the pursuit of terrorists and were involved with them.

The announcement adds to this conflict with the complete destruction of the aforementioned teams, four terrorists killed and their weapons, communication equipment and ammunition to the hands of the Islamic warriors.

This announcement has been stipulated: the Warriors camp Hamza Hossein (PBUH) land force readiness with Corps and all-round information nobles, in keeping with other intelligence, security, military and law enforcement organs to allow the width of the counter-revolution and elements affiliated to the enemies and the people of Iran, and not any effort it e OBO to create insecurity in the country will respond with firmness.