The Chief of Staff of the Armed Forces, emphasizing that the war on the Islamic Revolution by the enemies would be a huge disadvantage for them, recalled the necessity of inventing revolutionary and jihadi methods to counteract the threats of the enemies.
News ID: 67612 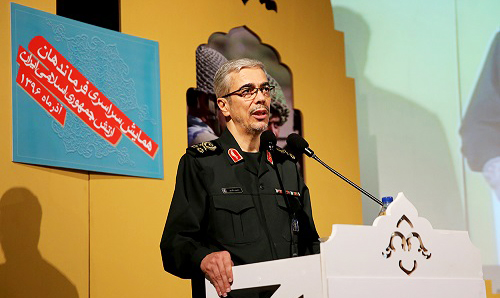 Though change the foreign policy of France in Syria than overthrow Bashar Al-Assad, "strategy", "by Francois struggling Socialist former President" and this country and keep track of, can be a more rational strategy "of the current President, Emmanuel macron The passion to take into account the historical experience shows, but France is always looking for keep has been dominated over the dinner and will also be in the future.

The most extensive Roman Empire State Blue-Earth is up today on the ground. The beginning of the European relationship with the land of the dinner time.

After the split of the Roman Empire into two Kingdom of Eastern and Western, spoken in Western Europe with the ports of Syria continues to maintain the presence of European forces again, but it was on the eastern coast of the Mediterranean Sea, this time in the form of a so-called Holy War Knights of the crusade, once again have the opportunity to communicate among members of the EU, in particular, Ferran The three, with people prepared dinner.

The Crusades and the presence of people from modern-day France (the old Gul and the nerman) among the Knights of the crusade now in Palestine and dinner, which many Muslims in their experiences of science and technology that was unknown to them, learn.The relationship between the Jewish and Crusader Knights with learn the secret Jewish witchcraft and actions (known as Kabbalah) at the same time.

During the following years and after the Renaissance period, English and French to the importance of the area to extend the influence of the Eastern Mediterranean to the East, over the past, survived. Therefore, significant competitive between Great Britain and France to seize more areas in Western Asia were ambushed.

The result of this competition, the East Mediterranean territories divided between Britain and France was such that France on Lebanon and Syria and Britain on Iraq, Jordan and Palestine, in addition to part of the Hejaz, dominated the peninsula. This happened after the first world war and the implementation of a treaty known as the Sykes-Picot, "" between England and France.

During World War II the German supporters scene in Syria also conflict between the British army and Hitler and the militia it was Zionist support. "The fatwa Haj Amin, Mufti Azam-Hosseini of Palestine, in order to support the German forces, plays an important role in this field.

After the defeat of Germany, the French dominated on the West Asia was revived again and this time in addition to Syria, a new entity called the Zionist regime (of Israel with a fake name) was formed from Paris. The independence of the Zionist Jews of occupied Palestinian land, while in France it was confirmed that this country, Syria and Lebanon under colonialism itself was kept.

Finally, the national forces in the Syria campaign results and gave this country on April 17, 1946 the French colonization. However the French interventions in Syria continue. One of the most obvious examples of this intervention, the French support of the army of the Zionist regime in the aggressor's war with Syria.

The next confrontation between Syria and France should be in a relationship with Iraq, Syria's competitor, search. With the Baath party that was in both countries but because of disputes the two countries, France. This support is in the country's civil war against the Islamic Republic of Iran also showed itself as the only Arab country that Syria was supporting Saddam in the war and refused at this juncture when a good relationship with Iran.

This issue later on the subject of Lebanon also showed his other form. The woman in charge of France to Syria in the matter of the assassination of Prime Minister "Congress" of Lebanon, which led to the withdrawal of Syrian troops from Lebanon and the army's attack on the Zionist regime to provide context to this country in the summer of 2006 and was 33-day war, a part of this project deal with France, "the power of Syria".

The most current developments in the crisis between France and Syria in the present century should be to support the French Government of the Syrian Government and enemy of terrorists takfiri centerpiece of Islamic resistance.

At the time of the so-called President Francois struggling left-oriented and the French Socialists, this support to its clear State.

Many of the leaders of the opposition and, in addition to officials and commanders of the terrorist was the so-called "moderate", to visit or attend political and media programmes, to Paris alone so far as the Tribune and a base against Bashar Al-Assad.

Support this topic later escalated Elizeh House officials of anger caused by the terrorist attacks in Paris. This issue caused the French over us military intervention in Syria ahead of support and accompany with it.

The end of the work of the U.N. monitors and François Emmanuel macron can be used as a kind of change in French foreign policy toward Syria in war time into account.

macron after watching the victory of the Islamic resistance front, a broad coalition of Governments and the existence of strong resistance among the axis on the subject of the fight against terrorism, this issue found that if France is not the loser, will certainly win the game.

He understood that matter in the context of the political situation in Lebanon, a neutral role in the events related to the mandatory resignation of Saad played without Congress adopting the positions of the regime in the field of fast action, Congress will return to Lebanon field.

That's why the new President of France, that you’re not a liberal politically, and not a Socialist, has decided with the United States while maintaining a strategic relationship, that of World War II until today remains of the policy dialogue with Syria to speak French in addition to the round-up of war In Syria, the peaceful way to revive past power in shamat.

However, it seems very unlikely to novice in politics to be able to macron the path of General de Gaulle with the help of the United States and Britain after the end of World War II for the type and direction of the French role-playing in the world of outlining.

On the other hand tend to revive lost power in the world, which in the past was a sizeable macron talk, show that France, the seat of power in what Napoleon have it and what their past calls for the revival of the power of the macron, on the shores of the Mediterranean and it is this policy, even if the In the shadow of the great power to the name of the United States, will not be changed.