Iranians’ Integrity against Rioters Led to Another Victory over Enemies

TEHRAN (defapress) – Iranian President Hassan Rouhani hailed spontaneous rallies held across the country to condemn recent riots and said the integrity of political parties as well as tribal and religious groups led to another victory for the Islamic Republic against its enemies.
News ID: 68025 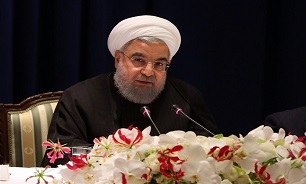 Addressing a session of the Supreme Council of Cultural Revolution in Tehran on Tuesday night, President Rouhani pointed to the recent unrest in Iran and said that it is necessary to study the cultural and socials root causes of the protests.

He further urged officials to try their hardest to communicate with the people and meet their rightful demands.

The president also pointed to nationwide rallies held to condemn recent riots and said the people’s “massive and wise presence” and their stance against some who insulted Iran’s holy flag and other sanctities, on the one hand, and the integrity of political parties, factions and ethnic and religious groups against the rioters, on the other hand, resulted in yet another victory over the enemies and the ill-wishers of Iran.

In late December, peaceful protests over economic problems broke out in a number of Iranian cities, but the gatherings turned violent when groups of participants, some of them armed, vandalized public property and launched attacks on police stations and government buildings.

Security forces say many rioters arrested in the recent unrest have been trained by the MKO terrorists or had links with the Takfiri terrorist groups.

Following the unrest, people held several demonstrations across the country to condemn the violent riots and acts of vandalism, and voice support for the Islamic Republic’s Establishment.

Iranian officials maintain that people have the right to stage protests to express their opinions as long as rallies comply with the legal conditions.