Commander Warns against Enemy’s Plots to Hit Iran through Cyberspace

TEHRAN (defapress) – Head of Iran’s Civil Defense Organization Brigadier General Gholam Reza Jalali raised the alarm that the enemy is seeking to spy on Iranians and establish its cultural dominance over the Islamic Republic through using cyberspace and social media networks.
News ID: 68161 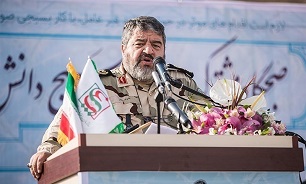 “Today, enemies use any possible way to spy (on Iran) and capture information,” Brigadier General Jalali said in a speech, adding that many smart electronic devices can be controlled and send information out of the country.

He further described the volume of information obtained from the Iranian people in social media networks as huge and said if the enemies gain access to the information, they can establish political, cultural and social dominance over Iran.

They can also have a big impact on the country in various sensitive junctures, such as election, the commander warned.

Leader of the Islamic Revolution Ayatollah Seyed Ali Khamenei has also on many occasions urged vigilance in the face of enemy ploys to gain a political and cultural foothold in Iran, warning that the consequences of such infiltration would be much worse than that of enemy’s economic influence.

“Economic and security infiltration is of course dangerous and has dire consequences, but the enemy’s political and cultural infiltration (into Iran) is a much more serious threat that everyone should be vigilant about,” Ayatollah Khamenei said back in September 2015.

As part of plans for cultural infiltration, the enemy has made heavy investment to gradually change the Iranian people’s beliefs, the Leader explained at the time.