most visited
عمومی << Home Page
One of the veterans advocate the Shrine of the Fatemiun in a dialogue with the defaPress:

The veterans forgotten / I would like to see leader

Seyed Hassan Mousavi is one of the Fatimid veterans and brother of a martyr defender of the Shrine who, although all the sufferings he suffered all the way through his time of war, only wanted to meet with the Supreme Leader.
News ID: 68238 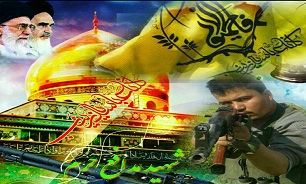 According to Epic and jihad reporter of DefaPress reporter: The name of the "Fatimid" has been named extra than any name, along with the names of the groups that are combating against the Takfiris and the Wahhabis in Syria, for the time being, the warrior who claimed from the early months of the Syrian war to defend the shrine of Zeinab (sa) swift, and today their importance shakes the limbs of the enemies of Islam.

Over the years, the company of the Shah's defending Afghan warlords on the battleground of Syria has given these armies, martyrs and many devotees Islam. Families that have by now been present on the Afghan-Iranian jihad, today obtainable martyrs and veterans to defend the holy shrine of Zainab (SA). The survival of families with three martyrs and devotees is an instance of their give up in defense of the Ahlul Bayt that, when we talk about members of their families, says nothing but thank God and continues in this way.

Our lives are sacrificed to Aunt Zeinab (SA)

Seyed Hassan Mousavi has lived in a close by township in Tehran 10 years ago and was functioning in a factory before he was in Syria. In the year 2014, she met with Fatemiun intermittently by one of her friends and narrated their story of Fatemiun in a talk with the DefaPress reporter: "One of our relations lives in Syria; I decided to trip her as well as pilgrimage I went to Syria, then the whispers of the war were heard; but I did not know much about it, one night I dreamed of the Syrian war, after which I saw one of my friends saying that you would like to go to Syria? I said why not, I'm going. "

"I was enrolled in Qom and received 21 days of armed training until I indoors in Syria in near the beginning 2014 and tired the new year in the region," he said. "I felt well that the shrine of Zaynab (SA). Roghaieh I piloted and defended myself, and I can defend that world against Zaynab (SA), who had a chance in defending my harem, I do not know if I would have to give it the response if I did not go. "

When he speaks of his attachment to defense of the shrine, he believes his attitude as the consequence of his decision to forfeit in this way, he says, "I went to Syria for the sake of Zeinab's aunt, in this way there is no acumen in saving, so who is this theoretical to be ours? When it can be exhausted in a way other than the right way, then what better is to be sacrificed on this alleyway?

After Sayyed Hassan, his brother Sayed Mehdi also went to Syria with his brother. in the face of the resistance of the older brother, Sayyed Mehdi decided to go to the obverse. "My brother was stitching in Iran," said Sayyed Hassan, "I said very much that I had to go on with the certificate, but insisted and required to go to Syria, once I went, I did not go, but it went on for a second time." I gave up my friend, but he did not succeed. "

I wish see your wedding ceremony

Both brothers were in the obverse when Sayed Mehdi said goodbye to Sayed Hassan, saying, "I'm going and not coming back." Sayyid Hassan said: "What did you say to me when I said that I was annoyed? Why are you saying this? "You're immense," I said, "do not say that, you have to be groom." It was a week because Albuqualie was gone. I heard from his friends, for the reason that he was the descendant to the part, and his commander went on holiday, he was doing things. During this general era, ISIL wounded were misplaced, their car strike by the enemy and suffered from Kornet, and my brother was martyred. "

Sayyed Hassan sustained in the description of his martyred brother: "He had a very good principles, in his dialogue with Dehiran, he always gave the correct to one more and did not talk on the superior word; the appeal was sensible and he did not look at the dignity."

Sayyed Hassan, by expressing a herd of officials who, throughout this epoch, did not concentrate to the veterans of the Fatimids, as he did not concentrate to the veterans of the Fatimids, and stated: "Now that my hand has been busted and I cannot do anything. Someone has nothing to do with us, I have asked to retort to Syria to struggle as much as I can, but they did not suppose it. Once they detained my motor for no reason. Whatever I said, I am the guardian of the shrine and my martyr brothers did not agree to it, and just for the reason that I am a refugee, they now charge 2 million and 500 USD to seize the money that I do not have. "

"I have a school girl and my wife is significant," said the follower of the shrine defender, accumulation: "Today, a shrine guardian with all his problems should not be extended to anyone." If my brother was martyred, Bobby picked him up, but why am I being a victim, why ought to I desert?! Once winning a time we were at the underside of the drain, but now we are entirely forgotten. "

The history of the attendance of the Mousavi family on the front, like many Afghan Shiites, does not end with the defense of the shrine, the father of the family is on the front of Afghanistan, and today these are the children who have followed the Father's course on the holy path. He said: "My father did not conflict. Always says about my brother that he was a zealot of Zainab (SA). Tells me you and your other brother, if you go once more, I have nothing to do. It is believed that the one who cries on his shoulders on the day of Ashura says he would like to help Imam Hussein (AS), today we must give a examination and this world is the test world. "

"Many families of martyrs met with the leader of the revolution, but nobody worked for us," said Sayyed Hassan. We do not wait for the Supreme Leader, we just would like to see them. "