twins which the martyrdom made a distance between them

Reza Dolatabadi said that before the Quds operation, we had an argument about which of us to take part in the operation. When I returned from the operation, I wanted to go back to the front, but Ali said that this time it's my twisted. Whatever I persevered on staying on and on, I did not accept that my brother was martyred in Operation Quds.
News ID: 69009 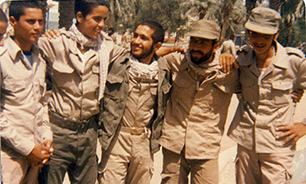 Epic and Jihad Defapress : Families of martyrs are between the people as an indicator. The interest and affection of these families in the people's minds about the rebellion is very effectual, because these people, in spite of the fact that their dear ones have been contributed to the revolution, are happy and thankful for their work. This has had an optimistic result on family morale.

Dawlatabadi's family is no exception. The family sent two twin children to defend the ideals of the revolution, and one of them was martyred at the freedom of Khorramshahr.

Martyr Ali Dawlatabadi's mother narrated the ethical characteristics of her children and the days of the victory of the revolution: "Reza and Ali was twin. They studied at a school and in a classroom and behind a desk. They also wore uniforms. Under no conditions would they be separated.

Later, when they got older, they got both diplomas, but they did not believe the university. So they went to military service. Their soldiers were at the same time as the rise of the revolution. During these days, Imam (peace be upon him) ordered you to empty the barracks. My two children also fled from the battalion. After the victory of the Revolution, they were prepared for military service after some time, both exemptions took place.

When both were exempted, they served the people in the mosque. At the base of the mosque, they were redistribution nights and inspecting cars. Reza and Ali were shortlisted into each other's army. Both of them went to the front and arrived until the announcement of the release of Khorramshahr, brought Ali's martyrdom news.

Ali was very kind, after in receipt of a diploma, he worked in a shop. After a while, he came home and said: "I'm not going to work anymore. The owner of the shop is lying. "When children and young people came to our house to study, Ali was uninterested with their questions. That's why the kids were very fond of it. "

Martyr mother continued: "Reza participated in Fatah al-Mabin operation, 40 days after his dispatch, he aware us that he was martyred. Ali was on leave at that time. He traveled to the region to get information from Reza. Reza came home a week later, but stayed Ali and participated in the Qqds operation. One time was wounded in the early stages of the operation, but returned to the front after a surface treatment. "

Reza Dolat Abadi, a twin brother of the martyr, narrates about his brother: "For twins, since our very starting, all our work was alike. I was, in terms of creature a weaker one, Ali, so I was always sick. Ali took my sickness and also wrote my assignments.

Before the Quds operation, we had a dispute with us on which of us to take part in the operation. When I returned from the Fatah al-Mubin operation, I wanted to go back to the front, but Ali said: This time it's my turn. I insisted on staying in and he did not accept. Ali carried out his activities in obscurity As a twin brother, I must say that I did not recognize him well. "