Marty Makareh, didn’t go to military service during Shah's regime and said the Shah's regime is criminal and should not be Ccriminals for them and which ones are the enemy of Islam and served up when the regime ruled the nation on tag hot oppressed I not leaving, even if military force is going to take me to escape.
News ID: 70764 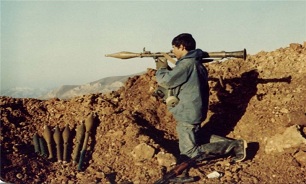 According to the defapress reporter, The warriors with a huge mission to gift out on the shoulders of their survivors. Odd to end 30 years of imposed war and the 40 years of the Islamic revolution, but the names of some of the martyrs among the people anonymous. To this end the Holy Defense Agency intends to introduce pay Martyrs biography of the name among the Terra. The more the result of watching "living martyr Muhammad":

Martyr makareh to the year 1957 was born in a moderate family. He grew up to the suffering and deprivation of a child and on the effect that the same poverty could not continue their education up to secondary III. M. because of poverty and deprivation in the pain of the people was informed. However, he added that in terms of the qualification as a high but as a result of the study, and had been a Knowing it insight and awareness that was open on the same effect every moment flame love of God and true Islam in his drag tabs from the inside.

Martyr Makareh due to not having prosperity that was inevitably after getting the third degree and will go to high school in a hotel with a bit of working rights. In the Pahlavi regime when he said why don't you answer to the military, said: "the Shah's regime is criminal and should not be ccriminals for this and which ones are the enemy of Islam and served up when the regime Taghot ruled the nation of on oppressed makes me not even to the Roman Military If you take the time to force me I will escape. "

After the formation of the Islamic revolution Guards Corps and with the approval of the Imam and the emphasis on this verse: «If the Corps did not enter the country wasn't, and guard day and night to maintain the security achievements of the revolution, and for one year was engaged in safeguarding, as this would put about an influx of anti-Kurdish revolutionaries He was quietly to the other because the guards of the garrison, but were deployed to the area and age with bravery and courage to fight the anti-revolutionaries who called Atman, but the Kurdistan people's Poor to kill, fire pay.

Finally, on 9 April caused RP 59 hit Jay was martyred. Turn the Wei is quite fragmented bones and fuel something of him.