TEHRAN (defapress) – A high-ranking Iranian military official highlighted the significance of orientation towards the East in the country’s foreign policy agenda, stressing that Iran should join the Shanghai Cooperation Organization and enhance ties with Russia, China and India.
News ID: 72778 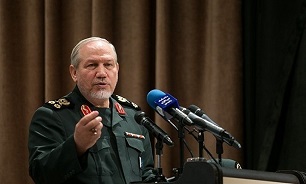 In order to counter the US’ sanctions, Iran should shape its political and economic diplomacy on the basis of enhanced ties with the Eastern Bloc, Major General Yahya Rahim Safavi, a top military aide to Leader of the Islamic Revolution Ayatollah Seyed Ali Khamenei, said Sunday.

He underlined that Iran should not focus only on the remaining parties to the 2015 nuclear deal (the Group 4+1 which includes Russia, China, Britain, France and Germany), but should take into account the great capacities of 15 neighboring countries when it comes to economic and political diplomacy.

Pointing to his specialty in political geography, General Rahim Safavi said concentration of power in the 21st century is shifting from the West to the East, adding that such power is based upon economy, culture and political awakening.

“In the world’s East, major powers in the 21st century will be Russia, China and India,” the top general explained, saying Iran should maintain and boost ties with them and try to become a permanent member of the Shanghai Cooperation Organization.

He then highlighted the waning power of the US and its failed policy of unilateralism, saying the contemporary world is moving toward multilateralism.

In comments in July, the Leader of the Islamic Revolution emphasized the necessity for diplomacy and enhanced foreign relations, saying, “Except for a few cases like the US, the country’s relations with the East and the West must be further strengthened and diplomacy’s operational and purposeful mobility should increase.”