Britain Has Blood on Its Hands over ‘Forgotten’ War on Yemen

TEHRAN (defapress) – A British MP accused the government of having “blood on its hands” over the Saudi-led aggression on Yemen, but almost half of people in the UK do not know the war even exists.
News ID: 73329 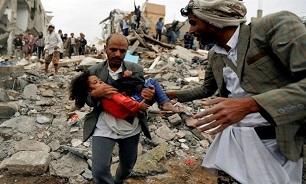 Only 58 per cent of respondents in a YouGov poll identified the country, where more than 15,000 people have been killed in three years of bloodshed, as a warzone.

“It’s very disturbing that despite everything that has happened there, interest is declining while the situation is getting worse,” the Labour MP told The Independent.

“The UK is involved but it is a blind spot. Somehow we need to make the public realize there will be blood on the administration’s hands.”

Vaz pointed at the government’s continued licensing of weapons and military equipment to Saudi Arabia, which leads the coalition accused of killing thousands of civilians and committing war crimes in a bloody campaign of airstrikes.

Launched in support of fugitive former president Abdrabbuh Mansour Hadi against Ansarullah Houthi fighters and other opponents in 2015, the bombing has also worsened a deepening humanitarian crisis that is taking more lives through famine and the world’s worst cholera outbreak.

Evidence of British-made bombs have been found at the scenes of alleged war crimes, but earlier this year the chairman of BAE Systems claimed he “did not know” if the firm’s equipment had been used to commit war crimes.

The murder of dissident Saudi Arabian journalist Jamal Khashoggi at the country’s consulate in Istanbul has provoked renewed calls for Britain to distance itself from its “strategic partner”.

Germany has paused arms exports to Riyadh over the killing but the UK has so far made no move to do the same.

Government statistics show that the UK has licensed £4.7bn worth of arms to Saudi Arabia since the bombing began, including £2.7bn worth of ML10 licenses that include aircraft and helicopters, and £1.9bn of ML4 licenses covering weapons including missiles and other bombs.

Andrew Smith, of Campaign Against Arms Trade said: “No matter how bad the situation has become, it has always been able to rely on the support of the UK government. What more would it take to end the arms sales and end the uncritical support that has been given to the (Riyadh) regime?”

Vaz, who was born in the Yemeni port city of Aden, called Khashoggi’s death “appalling” but added: “This is one man but 10,000 have died and we’ve not even had that kind of interest.”

He is among British MPs attending an international peace conference in Paris on 8 November, as official talks flounder.

“We feel our government is not doing anything,” Vaz said. “I tried to meet Boris Johnson several times but in all the time he was the foreign secretary he never met me.”

He said that while David Cameron replied to letters on Yemen personally, Theresa May has delegated responses to a military attaché.

The APPG on Yemen has now contacted Jeremy Hunt with a call to support a United Nations resolution demanding a ceasefire allowing the passage of humanitarian aid.

Vaz said: “We need the peace talks resumed or we cannot get a lasting settlement.”

Saudi Arabia and its partners have denied committing war crimes in the ongoing conflict, and Britain has been content to recognize the conclusions of the coalition’s in-house Joint Incidents Assessment Team.

In most cases the mechanism has found that the coalition acted lawfully, did not carry out a reported atrocity, or that a mistake was “unintentional,” often due to technical errors.

But a UN report released in August concluded that the Saudi-led coalition had committed acts that may amount to war crimes.

The coalition’s air and sea blockades – restricting the passage of food, humanitarian aid and medical assistance – violate humanitarian law and may amount to an international crime, the UN said.

The UN has recorded 6,660 civilians killed and 10,563 injured since March 2015, but said the real figures are likely to be “significantly higher”.

Despite the magnitude of suffering, 42 per cent of British respondents to a YouGov poll were unaware of the Yemen war.

When asked where they believed an ongoing armed conflict was taking place, three-quarters of the 2,100 respondents in the same poll said Syria, 63 per cent Afghanistan, 53 per cent Iraq and 46 per cent for both Libya and Myanmar.

The Human Appeal, which commissioned the research and is providing aid in Yemen, said the lack of awareness was “startling” as 14 million people face starvation.

Charles Lawley, the charity’s external affairs coordinator, suggested it could be the result of media coverage or the war’s complexity.

“The human price being paid every day, across Yemen, is horrendous and we feel like more of the UK should be aware of the realities in a conflict zone where violence and poverty reigns unabated in a disastrous cycle,” he added.

“More and more Yemenis are struggling to access clean water and hygiene facilities, allowing disease and infections to spread rapidly. Despite all of this, Yemen is being ignored.”