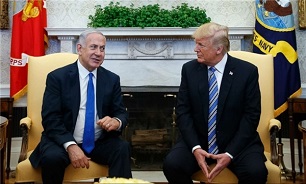 The military and intelligence cooperation between Saudi Arabia and Israel has increased over the past years although the government in Riyadh has no diplomatic relations with the regime in Tel Aviv and designates Israel as the occupier of the Palestinian territories.

In a new sign of growing ties between Riyadh and Tel Aviv, MbS hosted a group of Evangelical Christians in Riyadh on Thursday, Israeli media reported. The delegation held separate meetings with Saudi Foreign Minister Adel al-Jubeir as well as the kingdom’s ministers of education and Islamic affairs.

It comes after an American daily reported that Netanyahu has asked senior officials in the Donald Trump White House to continue supporting the 33-year-old prince following the murder of journalist Jamal Khashoggi in the kingdom consulate in Turkey.

The two sides discussed a wide range of topics including Israel, Palestine and Saudi Arabia’s relations with the US, according to reports.

“We were pleased by the invitation extended to us more than two months ago by the kingdom of Saudi Arabia," the delegation said in a statement, adding that "without question, this is a season of tremendous change in the Middle East, and therefore we have been grateful for the opportunity to meet in-person with key Arab leaders to understand their goals and to ask direct questions”.

The meetings came shortly after The Washington Post revealed in a report earlier in the day that Netanyahu has asked US President Donald Trump to continue supporting MbS despite accusations that he ordered a hit job on Khashoggi in early October in Turkey.

Citing US officials, the report stated that Netanyahu described MbS as a “strategic ally” in the Middle East. The report also noted that a similar message was conveyed to the White House by Egyptian President Abdel Fattah al-Sissi.

Netanyahu recently visited Oman --- a country that had not hosted an Israeli Prime Minister since the 1990’s --- in a sign of the warming ties between Israel and Arab monarchies in the Persian Gulf. On his way to Oman, the Prime Minister’s plane flew over Saudi Arabia. In addition, there were a number of reports in recent months about an increase in Israeli-Saudi intelligence cooperation.

In mid-November 2017, a Lebanese paper published a secret document showing that the Saudis were willing to normalize relations with Israel as part of a US-led Israeli-Palestinian peace effort and unite Saudi-allied countries against Iran.

The document, published by al-Akhbar daily, was a letter from al-Jubeir to bin Salman, explaining why it was in the kingdom’s interest to normalize relations with Israel. The letter noted that a rapprochement between Saudi Arabia and Israel has risks for the kingdom due to the strength of the Palestinian cause among Muslims.

It comes a month after chief of staff of Israeli military, Lieutenant General Gadi Eizenkot, announced that Tel Aviv was ready to share intelligence with Saudi Arabia in their joint efforts to confront Iran.

Speaking in an interview with France 24 television news network in December 2017, al-Jubeir revealed the kingdom has a “roadmap” to establish full diplomatic ties with the Tel Aviv regime.

The Saudi Arabia's crown prince has also recognized Israel, stressing that Israelis are entitled to their own land, stating during an interview with the Atlantic in April 2018 that “I believe that each people, anywhere, has a right to live in their peaceful nation. I believe the Palestinians and the Israelis have the right to have their own land".

"But we have to have a peace agreement to assure the stability for everyone and to have normal relations," he added, noting that kingdom has no problems with Jews and that "there are a lot of interests we share with Israel".