If US remained in Iran, Islamic Revolution wouldn’t have reached its 40s 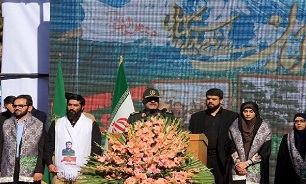 Major General Mohammad Ali Jafari made the remarks during a rally outside the former US embassy building, also known as the ‘Den of Espionage’, in Tehran on Sunday.

Interim Government of Iran was after diverting the Islamic Revolution with having secret contacts with the United States, he said, adding that university students which followed the late Imam Khomeini’s thoughts couldn’t stand this situation and took over the US embassy.

Following the support of Imam Khomeini, other people also joined the rally and created the ‘second revolution’, he highlighted.

Elsewhere Jafari said that the Pentagon has banned the spreading of any news about Iranian military power among its soldiers in the region so as to not affect their spirit.

He also said that the United States has always faced defeats in its encounters with Iran, adding that Operation Tabas, 8 years of holy defense, and their inability to implement the so-called ‘New Middle East’ policies are among the main US’ failures.