Iran, Iraq can ramp up trade to $20bn

TEHRAN (defapress) – Iranian President Rouhani said Sat. that the current economic transactions between Iran and Iraq stands at about $12 billion, which can be boosted to $20 billion with further cooperation.
News ID: 73765 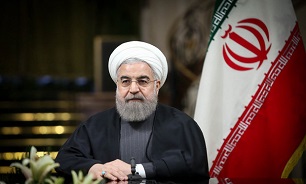 President Rouhani made the remarks in a press conference with his Iraqi counterpart Barham Salih on Saturday in Tehran, which was held after their bilateral meeting earlier that day.

The Iranian president maintained that the two sides held talks on electricity and gas swap, as well as cooperation on petroleum products and oilfield exploration and extraction.

The Shalamcheh-Basra railway is ready to come on stream, and the Iranian side is ready to carry out its side of the project together with the help of measures taken by Iraq’s Ministry of Finance, said Rouhani, adding that the 35km-railway will facilitate transport for the people of both countries.

Rouhani said the two sides also talked about environmental issues, noting the dust storms in western and eastern borders that need joint cooperation to be resolved. He added that Iraqi President Barham Salih has vowed to follow up on those environmental issues.

We reached an agreement to establish a free trade zone between the two countries, Rouhani added.

He further maintained that the two sides conferred on regional issues, saying the two believed that stability and security in the region will benefit all people, and there is no need for foreign interference in regional affairs.

The Iraqi president, for his part, highlighted that Iraq would never forget Iran’s support in defeating terrorism in the country.

After the military defeat of ISIL, Iraq has ahead of itself the two important objectives of ‘reconstruction’ and ‘strengthening of political stability’, he added.

President Salih maintained that the realizaion of these two goals requires political and economic measures and reforms, as well as stable conditions in the region.

It is time for the formation of a new regional order which can be in the interest of all regional states, President Salih stressed, adding that Iraq attaches high significance to Iran’s role and place in this new regional order.

He further voiced hope that the implementation of joint projects such as railway connections between Iran and Iraq could provide the necessary condition for Iraq to play a more active role in the region, and allow other countries in the region to form relations based on mutual interests.