TEHRAN (defapress)- Supreme Leader of the Islamic Revolution Ayatollah Seyed Ali Khamenei strongly blasted the interference of foreign countries, specially the US, in the affairs of neighboring Iraq, and called on the Iraqi nation to boost its resistance against the aggressors.
News ID: 73795 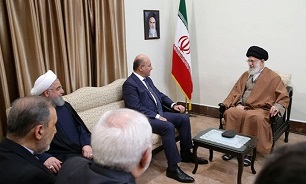 "The way to overcome problems and counter ill-wishers' plots is to preserve national unity in Iraq, properly recognize friends from foes, stand up to the brazen enemy, rely on youths and maintain and strengthen links with the [clerical] sources [of emulation]," Ayatollah Khamenei said in a meeting with Iraqi President Barham Salih and his accompanying delegation in Tehran on Saturday.

"The only way to counter such plots is to maintain and strengthen unity among Iraqi groups, including Arabs, Kurds, Shia and Sunni [Muslims]," he said.

Ayatollah Khamenei also hailed the Iraqi government and people's hospitality towards Iranians during Arbaeen procession, which marks the 40th day since the martyrdom anniversary of Imam Hussein (PBUH), the third Shiite Imam.

The Supreme Leader lauded the recent successful parliamentary vote in Iraq and the election of a president and a prime minister as well as the establishment of stability in the country.

The Supreme Leader pointed to the suffering of the Iraqi people in the past, and said, "Some ill-wishing governments and countries now seek to deprive Iraqis of the sweet taste of their great achievement of gaining independence and prevent the restoration of peace in Iraq and the entire region."

Ayatollah Khamenei also reiterated the importance of properly recognizing friends from foes in foreign policy, and said some countries in the region and abroad bear a bitter grudge against Islam and Shiite and Sunni Muslims in Iraq.

"They are interfering in Iraq's internal affairs," Ayatollah Khamenei said, stressing the importance of strongly resisting against them without any consideration.

During the meeting, which was also attended by Iranian President Hassan Rouhani and Foreign Minister Mohammad Javad Zarif, Salih, for his part, said he carries a clear message that nothing can change factors linking the two nations.

The Iraqi president added that Baghdad seeks to expand relations with Tehran in all sectors in line with common interests.

He said Iraq would never forget Iran’s help in the fight against Takfiri terrorism.

President Salih expressed the hope that Iraq would be able to enjoy Iran's cooperation and capacities in the reconstruction process of the country.

In relevant remarks earlier on Saturday, President Salih underlined that relations with Iran and its influential role in the region are highly important to Baghdad.

"Today, I have brought you a clear message from Baghdad. We, in Baghdad, understand the importance of relations with Iran well and the cultural, economic and social ties between the two countries are rooted in history," Salih said, addressing a joint press conference with his Iranian counterpart Hassan Rouhani in Tehran

He appreciated Iran's support for the Iraqi people during Saddam's era and its assistance to Baghdad in the fight against the terrorist groups, and said, "Iran played a huge role in defeating terrorism through its supports (for Iraq)."

Elsewhere, Salih said that time is ripe for the formation of a new regional order which would meet the interests of all nations, and said, "We attach highly great importance to Iran's role in this new regional order."

He underscored the importance of establishment of free trade zones along the two countries' borders, and added, "I am keen to emphasize the necessity for developing bilateral relations and we have asked the foreign ministry and the relevant committees in the industry ministry to expand their activities to this end so that trade cooperation between the two countries will increase."

Iran is currently Iraq's top trade partner, with an annual turnover standing at about $12 billion.

Foodstuff, livestock, construction materials and plastic products constitute the bulk of Iran’s exports to Iraq where Iranian vehicles and food data-x-items are a ubiquitous sight.

Iran and Iraq have also been exchanging oil through a swap deal under which crude from the Kirkuk field in northern Iraq is shipped by truck to Iran, which uses it in its refineries and delivers the same amount of oil to Iraq’s southern ports.