TEHRAN (defapress) – The former foreign minister of Yemen, Khaled al-Yamani, sparked anger in his country after he demanded the Houthi Ansarullah Movement, who control the capital and large swaths of territory, hand over power to his exiled government.
News ID: 74178 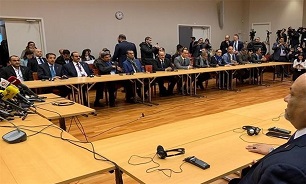 Speaking at the United Nations-sponsored peace talks in the Swedish town of Rimbo on Thursday, Yamani gave little indication he was going to offer concessions to his adversaries after the first day of peace talks were held in nearly two years.

"They (the Houthis) should withdraw from the institutions of the state and hand them back to the legitimate government," a defiant al-Yamani told Al Jazeera.

"They should respect the will of the international community and surrender their arms, ammunition and missiles."

Residents in the capital criticized Yamani's remarks saying it appeared the government was trying to sabotage negotiations before they could even begin.

Mohammad al-Ghabsi, a journalist at the al-Thawra newspaper said, "Al-Yamani represents the 'legitimacy' [the Yemeni government] that the Saudi capital has taken in by mobilising armies and the world's weapons to try and return it to the Yemeni people. But they [Yemenis] have spat it out and thrown it outside their borders, politically and geographically."

Another resident said it was surprising that Yamani would make such remarks and not focus on his government's inability to return to Aden, where the foreign minister hails from.

"He's unable to return to his hometown and knows this well, so how does he think can return to Yemen and take our cities," he said requesting anonymity.

Officials from fugitive former president Abd Rabbuh Mansur Hadi's government and representatives from the Houthi movement are holding separate closed-door discussions with the UN until December 14 aimed at discussing ways to end the fighting that has killed an estimated 56,000 people.

The UN's special envoy for Yemen, Martin Griffiths, is seeking to introduce a set of confidence-building measures at the talks that will eventually pave the way for future negotiations to end the war.