TEHRAN (defapress) – Tehran’s provisional Friday Prayers leader warned against the ongoing human tragedy in Yemen in the wake of the Saudi-led war and said today, the only solution to the crisis is Yemeni-Yemeni talks.
News ID: 74179 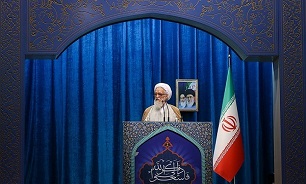 Addressing a congregation of worshippers in Tehran on Friday, Ayatollah Mohammad Ali Movahedi Kermani described the Yemeni issue as a test for self-proclaimed advocates of human rights.

The massacre of the Yemeni people at the hands of the Al Saud regime, under the support of the United States and the Zionist regime of Israel, proves the false claims of those who claim to defend human rights, he added.

Today, the destruction of Yemen’s infrastructure and health centers and the killing of innocent people is the response of Western liars to the legitimate demands of the Yemeni people, the cleric said.

The only solution to the Yemeni crisis is Yemeni-Yemeni talks, the cleric went on to say.