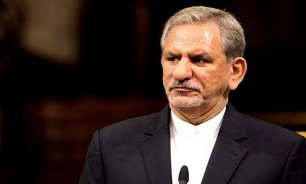 In a message on Tuesday, Iranian First Vice-President Es’hagh Jahangiri expressed deep regret and heartfelt condolences over the death of a number of army personnel who were part of a crew on board of a cargo plane that crashed in Alborz province near Tehran on Monday morning.

The plane was a Boeing 707 belonging to the Iranian army, which was carrying meat from the Central Asian nation of Kyrgyzstan. It crashed after it overshot the runway during landing, which led to the death of all 16 people on board except the flight engineer who is reported to be in critical condition.