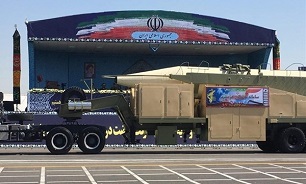 The new generation of missiles with guided warheads has been named Khorramshahr 2 and they can be controlled until hitting the target and are able to carry warheads weighing nearly 2 tons.

The new warheads had earlier been mounted on Iran's home-made Emad missiles and Qadr and Qiam ballistic missiles.

Khorramshahr is a ballistic missile which has a range of 2,000 kilometers and is capable of carrying multiple warheads.

"The range of Hoveizeh missile is over 1,350km and it is good for targeting ground targets," Hatami said, addressing the ceremony.

He mentioned rapid reaction, low flight altitude, high precision in navigation and high destruction power as among the main features of the missile.

"Hoveizeh ground-to-ground cruise missile has been test-fired in a 1,200-km range and it managed to precisely hit the specified target," Hatami said, adding that the missile will increase the Iranian Armed Forces' capabilities and Iran's deterrence power.

The missile is due to be delivered to the Islamic Revolution Guards Corps (IRGC) Aerospace Force.

Iranian officials have repeatedly stressed that the US pressures have failed to force Tehran compromise and curb its defense and missile capabilities.

"We have (earlier) said about the missile issue that we will not compromise at all about our country's defense issues and will not allow others to interfere in it," Secretary of Iran's Supreme National Security Council (SNSC) Ali Shamkhani said last month.

He, meantime, reminded that Iran's missile capability is "defensive and deterrent".

Shamkhani referred to the US President Donald Trump's economic pressures against Iran with the aim of forcing the country to accept Washington's irrational and hegemonic demands, and said, "We will not compromise our honor under Trump's bullying. This is the clear message of the Iranian government to the White House; sanctions will no way serve as an instrument to enforce renegotiations on issues already agreed upon."