Iran has given no commitment to any country on Yemen

TEHRAN (defapress) – Iranian Foreign Ministry Spokesman Bahram Ghasemi, stressing that Yemen is an independent country and only Yemenis can decide on their country, said "Iran has given no commitment to any country on Yemen."
News ID: 75677 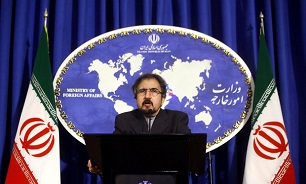 The Yemeni crisis, the three-year aggression against the country, the killing of innocent people and the humanitarian crisis in Yemen have always been on the agenda of the diplomatic talks between the Islamic Republic of Iran and other countries, Ghasemi said while commenting on recent remarks by the UK Foreign Secretary Jeremy Hunt who claimed during meeting with his Iranian counterpart Mohammad Javad Zarif he had discussed the situation in Yemen with the latter offering him some promises on the issue.

"Iran has given no commitment to any country on Yemen; Yemen is an independent country and only Yemenis will decide on their country," he noted, adding "by promises, Jeremy Hunt refers to commitments made at Stockholm summit between the Yemeni sides to establish a ceasefire."

Ghasemi underlined that Iran will have no intervention in Yemen, but will spare no efforts in finding peaceful solution to Yemeni crisis and preventing continuation of humanitarian disaster in this country.

He added that various meetings were held last year between Iran and some European countries including France, Germany, UK and Italy who were interested in Yemen issue and, thanks to Iran's efforts, grounds have been prepared for holding Stockholm meeting and UN-brokered intra-Yemeni talks.

Elsewhere in his remarks, he urged the international community to make efforts to find a solution to this disaster and save Yemenis from this difficult situation, calling on European states to stop selling and sending destructive arms to aggressors.