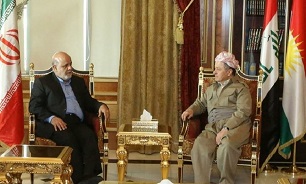 Iraqi Kurdistan Democrat Party leader Masoud Barzani's office said in the meeting, the two sides emphasized further development of the Kurdistan Region of Iraq and the Islamic Republic of Iran.

The political process in the Kurdistan Region of Iraq, government formation in the region and the parliamentary session of the region were among other issues discussed in the meeting.

Barzani's office stated that Barzani's recent visit to Baghdad was positive and worthwhile.

Increase in volume of cooperation between Erbil and Baghdad and development of bilateral relations were the subjects highlighted in the meeting discussions.

Iraj Masjedi, Ambassador of the Islamic Republic of Iran in Baghdad met and conferred with Masoud Barzani, leader of the Democratic Party of Iraqi Kurdistan and other Region’s officials on Thursday.