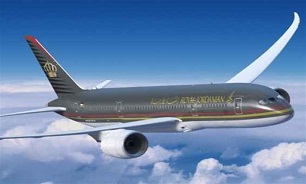 In a statement on Monday, the CARC stipulated that airline companies wishing to fly in Syrian airspace must present an evaluation study of flight risk, use a specified air route and altitude and take necessary precautions to ensure that safety is maximized, The Jordan Times reported.

The CARC added that it is still evaluating the conditions of Syrian airports, especially the Damascus International Airport.

In January, the CARC sent a technical delegation that employed international standards of evaluation to assess the risks associated with flying in the Syrian airspace, the report added.

Back in 2012, Royal Jordanian halted flights over Syria and re-routed them.

Amman had recalled its ambassador from Damascus a year earlier when foreign-backed militancy broke out in Syria.

Jordan also began providing support to some of the militant groups fighting to topple the government of Syrian President Bashar al-Assad.

In recent months, however, Jordan – among other Arab countries – has been moving to mend its ties with Damascus as the Syrian government, backed by Iran and Russia, has managed to defeat the militant outfits on the battlefield and wrest back control of almost all areas of the Arab country.