Iran Urges Alliance with Iraq against US Sanctions 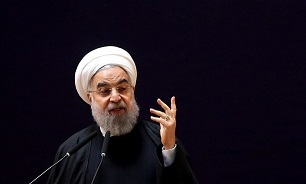 “At a time when the United States is seeking to pressurize the Iranian nation with its unjust sanctions, we need to develop and deepen our relations to stand against them,” Rouhani said in a meeting with representatives of Iraqi parties and political groups in Baghdad on Monday.

“All Iranian and Iraqi parties and political groups support development of relations between the two nations and this indicates that the two nations have no disagreements in deepening relations,” he underlined.

“In all these years, all officials of the two countries have made efforts to develop relations between the two nations, the president said, expressing satisfaction that the Iraqi and Iranian governments and nations have been alongside each other in critical junctures in history.

“Fortunately, today we are seeing security and stability in Iraq and we are happy that a good democracy is happening in this country and all parties are working for the future of the country.”

“There is still a long way until we reach full security and stability in the region and terrorism is rooted out,” the president added.

“Terrorism cannot be eliminated with only military power, because the world powers are supporting them, and today, we are witnessing their unjust actions in Syria and other countries,” Rouhani deplored.

Denouncing Zionism and those who want to dominate the wealth of the countries of the region as the root cause of troubles in the region, the Iranian president said, “Major powers are seeking their own interests.”

“Today, Iran and Iraq are enjoying the closest relations with each other,” he stressed.