Iran to Launch Preemptive Strikes against Threat at Borders 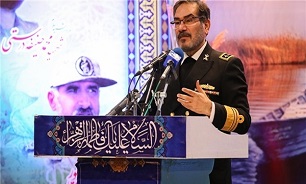 "Any attempts to stir insecurity at Iranian borders by any group or country will follow tough preemptive and offensive measures," Shamkhani said, addressing a meeting in the Northwestern city of Orumiyeh on Wednesday.

He also underlined that Iran precisely monitors establishment and development of military bases by trans-regional countries near its borders.

Elsewhere, Shamkhani said that the anti-revolutionary groups supported by a number of regional and trans-regional countries have in the past two years made lots of attempts to foment insecurity at the Northwestern borders of Iran but they failed thanks to the vigilance and tough reaction of the Iranian Armed Forces and security apparatus.

In relevant remarks in September, Shamkhani warned that any hostile move and threat against the country would receive a much stronger response.

"The hit-and-run era in the world has ended and we will give a response to any hostile move in any area ten times stronger than that," Shamkhani said.

He referred to the Islamic Revolution Guards Corps (IRGC)'s September missile strikes against the headquarters of the Kurdistan Democratic Party – Iran (KDP-I) terrorist group in the Iraqi Kurdistan region, and said, "The recent missile response to the actions of a terrorist group which fomented insecurity (in Iran) and are stationed in the Iraqi Kurdistan region is an approach which will be used in response to any threat."

Iranian missiles targeted the headquarters of the KDP-I and the Democratic Party of the Iranian Kurdistan (PDKI) terrorist groups in Koya in September.