TEHRAN (defapress)- US-backed Kurdish fighters in Syria declared their final victory over the Islamic State of Iraq and the Levant (ISIL or ISIS), ending bloody battle against the group that once held territory spanning a third of Syria and Iraq.
News ID: 76359 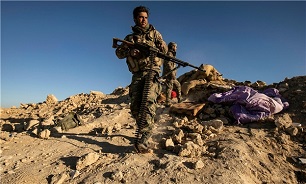 An official of Washington-backed Syrian Democratic Forces (SDF) announced the defeat of the militant group via Twitter on Saturday, Middle East News reported.

"Baghouz has been liberated. The military victory against Daesh has been accomplished," Mustafa Bali, head of the SDF media office, wrote on Twitter.

The US Defense Department announced on Friday that the Islamic State no longer holds any territory in Syria, according White House Spokeswoman Sarah Sanders.

US Acting Defense Secretary Patrick Shanahan briefed President Donald Trump as he was travelling to Florida on Air Force One, Sanders said on Friday, adding that the "territorial caliphate has been eliminated in Syria".

Responding to a question regarding whether the militant group's territory had been "100 percent" eliminated, Sanders stated "Yes". She directed other questions regarding the announcement to the Pentagon.

Days ago, Trump has confirmed that 400 US soldiers will remain in Syria indefinitely while once again promising a complete defeat of Islamic State terrorists in the war-torn country.

Notably, Trump did not give any credit to the Syrian Army, Russia and other allies for reducing the self-styled caliphate to its current miserable state.

In December 2018, Trump declared the IS terror group defeated in Syria and announced American troop pullout from the country but gave no timeline. The surprise announcement resulted in the resignation of Secretary of Defense James Mattis, US anti-IS coalition envoy Brett McGurk and Pentagon Chief of staff Rear Admiral Kevin Sweeney who disapproved of the American president's decision.

Over the past years, Iran and Russia have been respectively lending military advisory support and aerial backup to the Syrian military in its battle against militants and Takfiri terrorists. The foreign-backed groups started a campaign of bloodshed and destruction against the Arab country in 2011.

A UN report seen by Reuters has estimated there are up to 18,000 Daesh militants in Iraq and Syria, including up to 3,000 foreign fighters. It warned the group was interested in attacking aviation and using chemical, biological, radiological and nuclear materials.