TEHRAN (defapress) – Turks began voting on Sunday in local elections that President Recep Tayyip Erdogan has described as a matter of survival for the country.
News ID: 76512 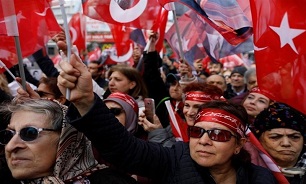 Voters in provinces in eastern Turkey began voting at 7:00 am (0400 GMT), while voting in the rest of Turkey begins at 8:00 am, Reuters reported.

Just over 57 million people are eligible to vote. A clear picture of the winners will probably emerge around midnight.

Sunday’s elections, in which Turks will vote for mayors and other local officials across the country, will be the first since Erdogan assumed sweeping presidential powers last year and will be a reckoning for his government.

Defeat in either Ankara or Istanbul would bring to an end a nearly quarter century rule by Erdogan’s AKP or its predecessors in those cities and deal a symbolic blow to Turkey’s leader.

Ahead of the vote, the main opposition Republican People’s Party (CHP) and Iyi (Good) Party formed an electoral alliance to rival that of the AKP and its nationalist MHP partners.

The pro-Kurdish opposition Peoples Democratic Party (HDP), which Erdogan has accused of links to Kurdish militants, has not made an official alliance and is not fielding candidates for mayor in Istanbul or Ankara, which is likely to benefit the CHP.

In the days leading up to the vote, Erdogan has held around 100 rallies across the country, speaking 14 times in different districts of Istanbul over the past two days alone and more than four times in Ankara throughout his campaign.

He has described the elections as an existential choice for Turkey, blasting his rivals as terrorist supporters aiming to topple Turkey. He has warned that if the opposition candidate wins in Ankara, residents would “pay a price”.

His opponents have denied the accusations and challenged his characterization of the elections as a matter of survival, saying Erdogan had led the country to its current state.