IRGC Copters Save Hundreds Trapped by Flood West of Iran 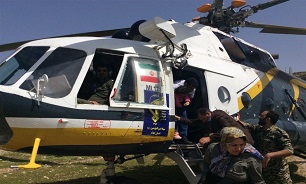 In a major rescue operation displaying the preparedness of Iranian armed forces for disaster response, the IRGC Aerospace Force rescued 200 villagers trapped in flood-stricken areas in Ilam, ferrying them to safe zones.

The IRGC Aerospace Force helicopters flew 12 sorties across kilometers of flooded lands in Dareshahr and Majin regions of Ilam to pluck the people.

In the meantime, an Ilyushin Il-76 airlifter of the force freighted 25 tons of foodstuff and heating equipment to Ilam, which was then distributed across the flood-hit areas by choppers.