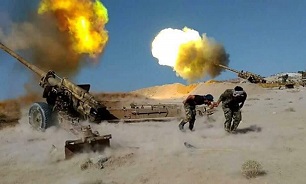 The Syrian Army's artillery and missile units heavily pounded the military positions and movements of Jeish al-Izza and Tahrir al-Sham al-Hay'at (the Levant Liberation Board or the al-Nusra Front) from Mourek, Kafar Zita, al-Latamaneh and al-Hawiz in Northern and Northwestern Hama towards safe zones and military points, killing and injuring a large number of them as well as forcing the remaining militants to retreat.

Meantime, the terrorists launched rocket attacks on al-Rashedeen residential area in al-Jamilieh district in the city of Aleppo.

In a relevant development on Monday, the Syrian Army pounded and destroyed the military positions and convoys of the terrorists in Northern Hama and Southern Idlib.

The source pointed to the dispatch of military equipment and militants by terrorists to that region, and said several military vehicles of the terrorists have been destroyed and tens of militants were killed or wounded after their convoys came under attack.

In Northwestern Hama, the Syrian Army units stationed in Sahl al-Ghab region targeted the movements of Tahrir al-Sham al-Hay'at in the outskirts of the town of al-Mansoureh towards the government forces' military points, destroying several military vehicles and killing a number of foreign terrorists.

Meantime, the terrorist groups stationed in Northern Aleppo, launched several rocket attacks on Share al-Nil, al-Khalediyeh and National Market districts which resulted in the death of 11 civilians and injury of 11 others.