US slaps sanctions on Pakistan over refusal to take back deportees

TEHRAN (defapress) – The standoff between the United States and Pakistan continues with the former leaving no stone upturned to create diplomatic and political hurdles for the latter.
News ID: 77092 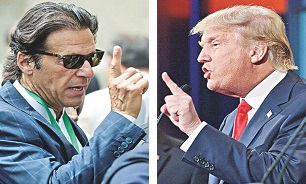 In the latest, the Trump administration has imposed sanctions on Pakistan after it refused to take back its citizens deported from the US, warning to withhold visas of Pakistanis including its senior diplomats.

The US State Department on Friday said that the sanction mentioned in a Federal Register notification dated April 22 may result in the US withholding visas of Pakistanis.

Pakistan is the latest to join the list of ten nations that have been slapped with sanctions under a US law under which a country refusing to take back deportees and visa over-stayers are denied US visas.

Eight of these countries have been imposed such visa sanctions under the Trump administration and two of them – Ghana and Pakistan – have been included in the list this year.

Relations between the US and Pakistan have steadily plummeted since the beginning of last year when the megalomaniac US president launched a scathing diatribe at Pakistan for not acting against terrorists.

And under the Imran Khan government in Islamabad, who has been vocal in his opposition to US policy for the region, the distance has grown between the two former allies.

Trump administration stopped financial aid to Pakistan for ‘not doing enough to dismantle terror sanctuaries’ in the country, which raised many eyebrows in Islamabad. Some people even took to streets to register their protest against the American government.

Experts in Pakistan assert that the economic losses suffered by Pakistan have been far greater than the economic and military assistance received by it since 2001. More than 60,000 Pakistanis have been killed and millions injured in a war that was imposed on them.

At present, Pakistan-US relationship has sunk to a new low and it seems highly unlikely that relations between them would improve anytime soon.

The other countries that have faced US sanctions in recent years include Guyana in 2001, the Gambia in 2016, Cambodia, Eritrea, Guinea, and Sierra Leone in 2017, Burma and Laos in 2018.

While the law has existed since 1996, it is only in last several years that there has been increasing demand from lawmakers for its enforcement against countries that had refused to accept deportees and visa over-stayers.

While section 243 (d) of the Immigration and Nationality Act was used only twice before 2017, the Trump Administration has been effective in using this provision on many countries, including Pakistan.

For some countries, sanctions begin by targeting officials who work in the ministries responsible for accepting the return of that country's nationals with escalation scenarios that target family members of those officials and potentially officials of other ministries and then other categories of applicants if initial sanctions do not prove effective at encouraging greater cooperation on removals by the targeted government, the notification said, quoted in PTI report.