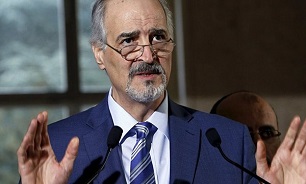 "This is economic terrorism that is escalating through unilateral economic measures," Ja'afari said in a Friday press conference in Kazakhstan's capital Nur-Sultan, previously known as Astana, presstv reported.

The Syrian envoy added that the unilateral sanctions were illegitimate given that they were not issued by the UN Security Council.

Ja'afari stated that the sanctions were on par with the “diplomatic and political terrorism” carried out by the West against the Arab country.

The US and its Western and regional allies stand accused of supporting a foreign-backed terrorism against the country which led to the killing of hundreds of thousands in the Arab country.

The US and the European Union also imposed draconian sanctions against the country during the years-long conflict, targeting Syrian oil imports, trade and financial institutions.

The Syrian people, who withstood an eight-year-long foreign-backed terrorist onslaught, are now bearing the brunt of the West’s oil embargo.

The sanctions has halted the post-war construction, and sparked widespread fuel shortages, bringing life to a standstill in Syria's cities. The government has now tried to manage the crisis by rationing cooking gas and vehicle fuel distribution.

The EU voted last May in favor of extending the bans until June 2019.

Seeking to counter Western measures hampering post-war reconstruction in the country, Damascus has greatly expanded its economic ties with Tehran and Moscow.

Earlier this year, Iran and Syria signed 11 agreements, including a “long-term strategic economic cooperation” deal, in what observers have described to be as a sign of changing realities in the Middle East.

Speaking on Friday, the UN envoy also slammed Turkey for its occupation of Syrian territory.

“Today the Turkish authorities occupy six thousand square kilometers of Syrian territory in Afrin and other cities, as well as Idlib,” he said.

Ja’afari also added that Turkey was illegally imposing its own curriculum in schools and building a 70 km long wall near Syria's Northern city of Manbij, separating Turkey-occupied Syria from Aleppo.

Speaking about the implementation of a demilitarization zone agreement in Syria’s Idlib province signed between Turkey and Russia last year, Ja’afari also condemned Ankara for failing to implement what it had agreed to.

“The Sochi agreement clearly stipulated that Turkey’s side was committed to the withdrawal of the terrorists groups to a behind a buffer of 20km,” he stated.

Many terrorist groups have remained in the demilitarization zone despite the agreement.

Ja’afari made the comments as delegations from Iran, Russia and Turkey were in the Kazakh capital Nur-Sultan on Thursday for a two-day summit seeking an end to the eight-year conflict in Syria.

The UN envoy for Syria, Geir Pedersen, also participated in the talks.

The talks, which are collectively referred to as the Astana peace process, have so far helped significantly reduce violence gripping the Arab country by establishing four de-escalation zones there. They have also paved the way for the formation of a Constitutional Committee.

Forming a constitutional committee is key to political reforms and new elections meant to unify Syria and end the conflict.

In a final statement issued at the end of the 12th round of talks, Iran, Russia and Turkey also categorically rejected US President Donald Trump's formal recognition of Israeli sovereignty over occupied Syria's Golan Heights.

"In this regard, they strongly condemned the decision of the US Administration to recognize Israel's sovereignty over the occupied Syrian Golan Heights, which constitutes a grave violation of international law, particularly the UN Security Council resolution 497, and threatens peace and security in the Middle East," read the statement.

The pace talks were held as Syria’s war against the foreign-backed terrorist groups is winding down, with the army reclaiming most of the terrain captured by the terrorists since the war began in 2011.