TEHRAN (defapress) – The secretary general of Iraq’s al-Nujaba Movement, a major Shiite resistance group, described a recent visit to the Arab country by a high-ranking Saudi delegation as “unprecedented” and said the Resistance Front’s victories forced the Saudis to bow to Iraq.
News ID: 77215 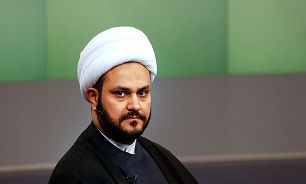 In remarks released on Saturday, Sheikh Akram al-Kaabi pointed to a change in the Riyadh regime’s behavior after the victories of the Resistance Front over Takfiri terrorist groups in Iraq and said Saudis came remorsefully and bowed to Iraq after their mercenaries failed to defeat the Arab country, al-Nujaba’s Centre for Relations and Media Affairs in Iran reported.

The secretary general of al-Nujaba further hailed the achievements of the resistance forces and said they can guarantee respect and security for the Iraqi nation.

“For example, Saudi Arabia sends a delegation to Iraq, an unprecedented step in the history of the two countries,” he said, adding that the Saudis had not made such a move even when they had close ties with former Iraqi dictator Saddam Hussein.

“…What forced Saudi Arabia to come to terms with this fact is the achieved victories,” the cleric said, referring to the Saudi failure to change government in Iraq via a proxy war.

The visit of the Saudi delegation came in preparation for the implementation of an agreement between the two sides on launching direct flights between Saudi Arabia and Najaf airport, the media service of the airport said, according to the Baghdad Post.

For the first time in decades, the governments of Iraq and Saudi Arabia signed on January 17, as many as 13 agreements in the fields of energy, oil, investment and agriculture.

Saudi-backed Daesh militants made swift advances in much of northern and western Iraq over the summer of 2014, after capturing large swaths of northern Syria.

However, a combination of concentrated attacks by the Iraqi military and the volunteer forces, who rushed to take arms after top Iraqi cleric Ayatollah Ali al-Sistani issued a fatwa calling for fight against the militants, blunted the edge of Daesh offensive and later forced them to withdraw from the territories they had occupied.

In November 2017, the self-proclaimed caliphate of Daesh collapsed after Syrian and Iraqi armed forces and their allies managed to recapture the terror group’s last strongholds in the two Arab countries.