TEHRAN (defapress)- Iranian Health Minister Saeed Namaki blasted the US for imposing hardship on Iranian patients in dire need of easy access to drugs and medical equipment through its sanctions.
News ID: 77232 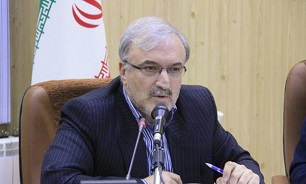 "The Americans' claim that drugs and medical equipment are not targeted by sanctions is a big and overt lie because there are problems for the transfer of money in all affairs, including those related to drugs," Namaki told reporters in the Northwestern city of Zanjan on Saturday night.

He, meantime, underlined that Iran has no shortage in medicine and needed medical equipment, adding that the government is trying to find ways to resolve the problems resulting from the US sanctions.

In relevant remarks in March, Iranian President Hassan Rouhani said that US’ unilateral sanctions against Tehran amounted to “crime against humanity”, and called on the Judiciary Branch of the country to file a lawsuit against American officials for imposing medicine and food bans on the Iranian nation.

Also, in the same month, former Iranian Foreign Ministry Spokesman Bahram Qassemi reminded that the US unilateral sanctions against his country were the biggest case of human rights violations affecting the daily-life of his fellow nationals.

“By imposing its unilateral, illegal and trans-regional sanctions on Iran, the US administration has spared no effort to violate the human rights of Iranian individuals,” Qassemi said in a statement.

Also in March, Iranian Foreign Minister Mohammad Javad Zarif, in a tweet, released the text of a letter signed by 66 Scientific Societies for Medical Sciences in Iran who called on Secretary-General of the UN António Guterres to condemn the US sanctions on Iran.

“66 Scientific Societies for Medical Sciences in Iran call on int'l community to,” Zarif wrote, “condemn US sanctions on Iran”.

He added that the signatories to the letter also called on the international community to “strongly resist the targeting of medical needs and humanitarian aid.”

The Iranian diplomat highlighted that the letter writers have also urged the world to “thwart targeting of research and scientific advancement.”

Zarif mentions António Guterres as the one addressed in the letter.

In relevant remarks a week earlier, President Rouhani referred to the US lies that the foodstuff, drugs and medical equipment are exempted from Washington's sanctions against Iran, and said, "This is incorrect. When the banking system is sanctioned, everything is affected."

Late in December, Managing-Director of Rare Diseases Foundation of Iran Hamid Reza Adraki took Washington responsible for the acute shortage of medicine needed for the treatment of rare diseases patients by imposing sanctions against the country.

“We have nearly one million patients who are grappling with some type of rare diseases in Iran," Adraki said.

Also, in November, President Rouhani said American officials had admitted their incapability to stop Iran's crude sales, and the US sanctions would only leave negative impacts on imports of foodstuff, medicine and medical equipment.