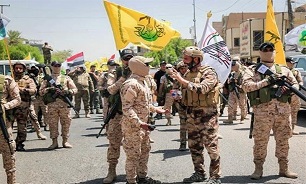 Hashd al-Shaabi said its forces have rid at least 10 villages in Salahuddin of Daesh (ISIL) terrorists and forced the Takfiri militants out of hundreds of square kilometers of areas in Salahuddin.

The Hashd al-Shaabi fighters and the Iraqi security forces launched the operation on Sunday to target the remaining Takfiri terrorists in Salahuddin, north of capital Baghdad.

Iraq declared the end of official military operations against Daesh in the Arab country in December 2017.

The popular forces have supported the Baghdad government in the fight against Daesh since the Takfiri group swept across Iraq in 2014.

In November 2016, Iraq's parliament voted to accord full legal status to Hashd al-Shaabi as a back-up and reserve force for the military and police and empower them to "deter" security and terror threats.

The Hashd al-Shaabi forces played a key role in checking the advance of Daesh on Baghdad and the holy cities of Samarra and Karbala in the summer of 2014 and later helped liberate Daesh-held areas to the south, northeast and north of Baghdad.