TEHRAN (defapress) – Syria has called on Security Council and UN Secretary-General to immediately condemn the terrorist attacks that target safe civilians, stressing that these attacks will not affect Syria stance in combating terrorism and working to restore security and stability to the Syrian people.
News ID: 77652 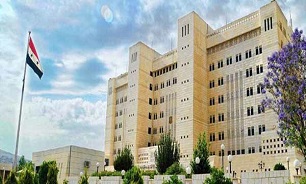 “Some Security council member states, particularly the US and western states, circulate fake information that the Syrian army and its allies shell civilian targets and facilities in Idleb… unfortunately, some officials at UN General Secretariat, for their part, are completing the circle of unprofessional information which mainly aim to mislead the world public opinion to protect Jabhat al-Nusra terrorist organization,” Foreign and Expatriates Ministry said in a letter sent to UN Secretary General and President of Security Council.

The letter expressed Syria's concern that the armed terrorist organizations continue their aggression, with missiles, on a number of safe regions in Hama northern countryside and Idleb southern countryside, that claimed the lives of scores of civilians.

The Syrian Arab Republic affirms that those terrorist attacks will not affect its stance in fighting terrorism and working to restore security and stability to the Syrian people and re-build what has been destroyed by terrorists, their partners and funders, it added.

“Syria calls on Security Council and UN Secretary-General to immediately condemn those terrorist escalations and support the Syrian state’s efforts in its war against terrorism… and it appeals to the Security Council to take deterring measures against countries which back terrorism in light of UN relevant resolutions, particularly No. 2170, 2178, 2199 and 2253,” the Foreign Ministry concluded.