US Maritime Coalition in Persian Gulf Never to Happen

TEHRAN (defapress)- A senior commander of Iran’s Islamic Revolution Guards Corps (IRGC) described the US plan to form a maritime coalition in the Persian Gulf region as building castles in the air, reassuring that it will fail to materialize.
News ID: 78255 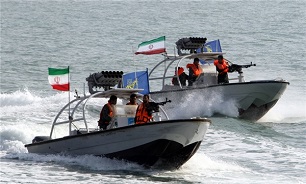 “The enemy should know that it cannot do anything. As have its previous coalitions, this one, too, will definitely go to rack and ruin and fail to materialize,” the IRGC deputy commander for political affairs, Brigadier General Yadollah Javani, said in Tehran on Thursday.

“The region’s security is provided by its nations, Iran, and our Armed Forces,” he asserted.

In June, the IRGC Air Force brought down a US Navy’s Northrop Grumman MQ4-C Triton drone near the Kouh-e Mobarak region — which sits in the central district of Jask County — after the aircraft violated the Iranian airspace.

Javani emphasized that if the US aircraft had been downed using an advanced S-300 or S-400 air defense system, its downing could not have been rated as a source of pride.

“But this masterpiece of American technology, which is reputed for being radar-evasive and stealth in action, was hunted down by an indigenous [Iranian] defense system dubbed Khordad-3,” he said.

The IRGC commander reiterated that Washington essentially does not harbor the idea of attacking Iran, apparently pointing to several occasions when senior American officials have disowned such intention.

“If, however, they choose to perpetrate a blunder someday, the entire region will come crashing on their heads,” the IRGC deputy commander concluded.

On Thursday, the Russian Foreign Ministry stated that Moscow is concerned by the increasing conflict potential in the Persian Gulf as the US seems to be seeking a pretext to start a war, expressing concern at Washington’s efforts to build up a coalition capable of deploying naval assets to the region.

"We have an impression that Washington is just seeking a pretext to both escalate tensions and pursue its aggressive rhetoric against Iran and proceed to a more active phase of the conflict", Foreign Ministry Spokeswoman Maria Zakharova said at a briefing in Moscow.

According to the diplomat, events in the region are "really moving to a dangerous point and there are risks of a large-scale military clash".

The US is adding fuel to a smoldering conflict, and is now building up “a naval coalition” tasked with piling military pressure on Tehran.

"We are concerned over significantly increasing conflict potential in the Persian Gulf region. The situation seems to be moving closer to the red line", Zakharova noted.

"There is a feeling that Washington is looking for a pretext for war," the Russian foreign ministry announced.

The United States has officially requested Germany, France and the UK to join its military mission in the Persian Gulf to counter Iran as tensions mount between the United States and the Islamic Republic.

Washington previously indicated that an "international maritime security framework", known as "Operational Sentinel", was being set up, and aimed at "enhancing security" for commercial vessels operating in the Persian Gulf, the Strait of Hormuz, the Bab el-Mandeb Strait and the Gulf of Oman in the wake of recent attacks on oil tankers.

The US-led coalition idea comes in the wake of escalating military tensions in the region. In mid-May, several tankers were sabotaged off the coast of the UAE. Two more tankers carrying "Japan-related" cargo were struck off the Gulf of Oman in mid-June.

The administration of US President Donald Trump has, without providing any evidence, blamed Iran for recent mysterious attacks against oil tankers. Tehran has vehemently denied the accusation, warning regional countries about possible "false flags" by foreign players.

Asked to comment on the US offer, the German Foreign Ministry told Sputnik news agency that Berlin is not seriously considering Washington proposal.

"The US recently presented its concept of a naval observation mission in the Persian Gulf to a number of its allies, including Germany, and asked them to participate. The government took note of the proposal, but made no promises. Foreign Minister [Heiko] Maas has repeatedly stressed that, in our opinion, priority must be given to reducing tensions, and to diplomatic efforts. We are in close consultation with France and the UK. Participation in the US strategy of 'maximum pressure' is ruled out for us," the foreign ministry said in a statement.

The statement came on the same day that German Finance Minister Olaf Scholz stated that his country was working closely with France and Britain amid tensions in the Persian Gulf.

“The goal of all responsible politicians must be to observe the situation very soberly and carefully, and not to sleepwalk into an even bigger crisis,” Scholz said in an interview with the Funke group of newspapers, adding, “De-escalation is the order of the day."

In early July, British marines and Gibraltar police seized an Iranian tanker off the Southern coast of the Iberian Peninsula. Gibraltar’s Chief Minister Fabian Picardo claimed that the ship was transporting crude oil to Syria “in violation” of the EU sanctions placed on Damascus. Washington has applauded the move, hailing it as a sign that Europe is on board with the US’ unilateral sanctions against Iran.

Iran condemned the “illegal move” of London and described it as “tantamount to piracy”. Tehran accused the UK of doing Washington’s bidding and helping the US attempt to stifle the Islamic Republic’s oil exports, rejecting London's claim that the supertanker was carrying crude for Syria.

Supreme Leader of the Islamic Revolution Ayatollah Seyed Ali Khamenei had slammed Britain’s illegal seizure of the oil tanker, warning London of a pending response to the seizure of the supertanker that he referred to as a case of "piracy".

Then a week later in mid-July, the Islamic Revolution Guards Corps (IRGC) impounded the British tanker ship, 'Stena Impero', as it was passing through the Strait of Hormuz en route to Saudi Arabia "for failing to respect international maritime rules”.

The United Kingdom announced London's plans to "put together a European-led maritime protection mission", in response to the seizure of a UK-flagged tanker in the Persian Gulf.

The recent moves by foreign powers in the Middle East such as US sanctions on Tehran's oil, UK seizure of Iranian supertanker, as well as, "sabotage operations" on oil ships have intensified the turmoil in the region and the turmoil in the international energy market, affecting global crude prices in recent months.

Tensions mounted between Tehran and Washington last May, when Trump pulled the United States out of the 2015 nuclear deal with Iran, officially known as the Joint Comprehensive Plan of Action (JCPOA), and re-imposed harsh sanctions against the Islamic Republic in defiance of global criticism. The American leader and his hawkish advisers National Security Advisor John Bolton and Secretary of State Mike Pompeo have since been stepping up pressure against Iranians.

European nations have resisted joining Washington's campaign of "maximum pressure" against Iran as they remain committed to the 2015 Iran nuclear deal, which promised Iran sanctions relief in exchange for a commitment to halt its nuclear program.

The tensions saw a sharp rise on the first anniversary of Washington’s exit from the deal as the US moved to ratchet up pressure on Iran by tightening its oil sanctions and sending military reinforcements, including an aircraft carrier strike group, a squadron of B-52 bombers, and a battery of Patriot missiles, to the Persian Gulf region. The Pentagon has also announced it was sending 1,000 additional US forces and more military resources to the Middle East.

Tensions between Washington and Tehran hit a new high in June after the US sent a number of military aircarft to the Iranian skies under a tense climate of escalating threats, forcing the IRGC Aerospace Force to shoot down one of the intruding American aircraft.

Iran has stressed that it will not be the initiator of any war, but reserves the right to self defense and will give a crushing response to any act of aggression by the United States.