Moscow to File Protests to US, Germany over Interference in Russia’s Politics

TEHRAN (defapress)- Russia’s Foreign Ministry will submit official notifications to Washington and Berlin over interference of their diplomats and the state-run media in Russia’s politics via covering unsanctioned rallies in Moscow, Russian Foreign Ministry Spokeswoman Maria Zakharova said in a televised interview with Rossiya’1 channel on Sunday.
News ID: 78283 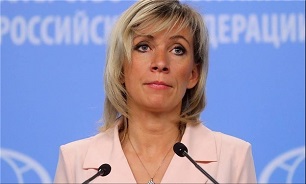 "As you know, nothing can be rubbed out on the internet. Unconditionally, we will officially submit all the files to the US embassy in Moscow, and not just to the embassy. I think that the US leadership will be much surprised at how their diplomats meddle with Russian internal affairs," Zakharova said recalling US multiple calls on Russia to stop interfering in US politics, TASS reported.

According to the diplomat, the US embassy to Russia was involved in the unauthorized rallies held in Moscow on August 3.

"As for Saturday’s strolls, the embassy of the United States was most closely involved in that activity," the Russian Foreign Ministry spokeswoman added.

"The US embassy in Moscow had published a route of that so-called stroll planned for Saturday," she explained, noting, "Item by item, minute by minute was the itinerary set out: what time it starts, what time it ends and so on and so forth," she added noting that a request was published at the end of the document asking not to follow the given route.

"As we understand, 90% of that information appealed to people to join the event," Zakharova stated.

The Russian Foreign Ministry spokeswoman mentioned the public comments voiced by the US embassy’s spokesperson after the banned protest.

"You merely compromise people who take to the streets and speak out what they think about Russia’s future. You are setting them up," Zakharova said addressing the US embassy’s diplomats.

She pointed out that along with western diplomats, some media outlets attempted to interfere in Russia’s domestic affairs. She named Germany’s Deutsche Welle news channel among them

Zakharova dubbed as a "phenomenal gaffe" the channel’s call on Muscovites to take to the streets made in the Russian language.

"Regrettably, we will have to notify the German side - moreover, the channel is state-funded - of our concerns and the practical steps we are going to take," the diplomat concluded.

According to the Moscow police press service, on Saturday police and National Guard detained about 600 people for participation in a 1,500-strong unauthorized event. The authorities had warned the protesters beforehand about their responsibility and the inadmissibility to break the law. Police cautioned them that provocations could be highly likely at the banned rally and urged both Muscovites and visitors to refrain from participating in it.

Moscow’s Prosecutor Office opened an administrative investigation against 15 unregistered candidates to the Moscow City Duma, who had organized unsanctioned rallies on July 14 and 27 ignoring a watchdog’s warning.

After the unsanctioned rally of July 27, a criminal investigation was opened in accordance with Part 1 Article 318 (violence against a public official) and Part 2 Article 212 (participation in mass unrest) of Russia’s Criminal Code. According to the Investigative Committee, more than 10 citizens were involved in these offences, as they took the most active part in organizing and holding mass unrest in the city center. Six of them have already been arrested in court.