TEHRAN (defapress) – The Islamic Revolution Guards Corps (IRGC) deputy commander for coordination highlighted Iran’s power and influence in the region and said governments that are hostile to the Islamic Republic are in a position of weakness.
News ID: 78328 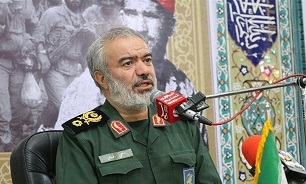 “Today, it has become clear to all the world and especially to our enemies that the power of our revolution is exemplary and that they cannot stand against it,” Brigadier General Ali Fadavi said in a speech in the central city of Isfahan on Thursday night.

“The hostile governments are in a position of weakness and passivity and they, themselves, admit it,” the commander added.

“Although they cannot express such weakness because of their arrogant nature, their actions and behavior clearly show that they are unable to resist the (Islamic) Revolution’s power,” the IRGC commander went on to say.