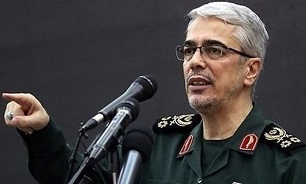 “It is expected that both sides (Pakistan and India) abstain from any hasty decision about the fate of the region that would not take the people’s will into account,” Baqeri said in a telephone conversation with Chief of Army Staff of the Pakistan Army General Qamar Javed Bajwa on Saturday.

The top commander expressed concern over tensions in the Indian-controlled Kashmir, warning that military approaches will further escalate the situation in the Himalayan district.

“We hope that political efforts will restore the basic rights of the region’s Muslims,” he added, emphasizing that Muslim nations were concerned about the developments in the disputed region.

Baqeri also stressed the need for restraint in order to manage Kashmir developments.

The Iranian and Pakistani military officials then exchanged viewpoints on border security, military and security relations between Tehran and Islamabad and latest regional developments, particularly the situation in Kashmir.

Bajwa, for his part, praised Iran’s concern for Muslims, saying that Pakistan will spare no efforts to secure its frontiers with Iran, so the borders will be the boundaries of peace, friendship and serenity for both the Pakistani and Iranian nations.

In a Thursday tweet, Senior Advisor to the Iranian Parliament Speaker Hossein Amir Abdollahian urged New Delhi and Islamabad to put the issue of Kashmir into a regional perspective, saying that regional efforts can resolve the issue through dialogue and peaceful means.

Amir Abdollahian said that Iran is “deeply concerned" about the escalation of tensions in Kashmir, highlighting that the situation in Kashmir doesn’t have a military solution.

“[We] welcome peaceful means and dialogue for securing interests of people in Jammu and Kashmir and resolving the crisis. Kashmir has no military solution,” he added, stressing that regional and international approach, specially under the OIC initiative is “a must”.

On Wednesday, Iranian Foreign Ministry Spokesman Seyed Abbas Moussavi called on New Delhi and Islamabad to exercise self-restraint and try to resolve their dispute over Jammu and Kashmir.

“Iran expects India and Pakistan, as two of its regional partners, to use a peaceful approach and dialogue to settle the dispute over Jammu and Kashmir,” The Iranian Foreign Ministry spokesman said in a statement, in reaction to the current developments concerning the disputed Jammu and Kashmir regions.

He said that the Islamic Republic of Iran is closely following the recent decision by the Indian government regarding Jammu and Kashmir, and will take into careful consideration the explanations presented by both Indian and Pakistani officials about the recent developments.

“The Islamic Republic of Iran expects India and Pakistan, as its friends and regional partners, to take effective steps in line with the interests of the people of the region by using dialogue and adopting peaceful means,” he added.