TEHRAN (defapress)- The Iranian foreign ministry expressed concern about the US testing of a new cruise missile, and called on the international community to show reaction to the move after the country withdrew from the Intermediate-Range Nuclear Forces Treaty, a landmark arms control agreement between Washington and Moscow.
News ID: 78472 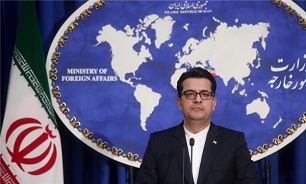 "The US measure is likely to lead to arms race at global levels which will exacerbate instability, threatens the international peace and security and will impose heavy economic costs on other countries which results in decreasing the level of world people's economic welfare," he said.

Last week, a modified ground-launched version of a US Navy Tomahawk cruise missile accurately struck its target more than 500 kilometers (310 miles) away. The test came after Moscow and Washington withdrew from the 1987 INF treaty.

In reaction, Russian President Vladimir Putin charged that the US waged a "propaganda campaign" alleging Russian breaches of the pact to "untie its hands to deploy the previously banned missiles in different parts of the world".

He ordered the Defense Ministry and other agencies to "take comprehensive measures to prepare a symmetrical answer".

The US said it withdrew from the treaty because of Russian violations, a claim that Moscow has denied.