TEHRAN (defapress)- Iranian President Hassan Rouhani underlined the need for his country to increase efforts to bolster ties and cooperation with the friendly states to live through problems resulting from the US sanctions.
News ID: 78529 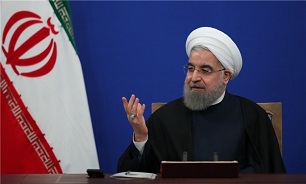 "We should use the capacities of friendly states and those which share views with us and decrease the problems," President Rouhani said, addressing a cabinet meeting in Tehran on Wednesday.

"Iran enjoys interaction and partnership with all the world states, except those which are after hostility," he added, noting that the country's growth in science and technology and its increased exports are due to its good interaction with the world.

"We should speak with the world and have interaction, but it is obvious that we should mainly focus on internal capacities because all our power is originated from inside the country," President Rouhani said.

Iran has increased its ties and cooperation with the neighboring states after the US imposed the toughest-ever sanctions against the country.

In relevant remarks on Tuesday, Iranian Deputy Foreign Minister for Economic Diplomacy Gholamreza Ansari  underlined Iran's active diplomacy of developing ties with neighbors and regional states, including Iraq, Syria, Turkey, Afghanistan and Pakistan, and said they are in urgent need of engineering and technical services.

Ansari expressed the hope that ground would be paved for the presence of the Iranian companies' stronger presence in the neighboring countries to reconstruct their economy and infrastructures.