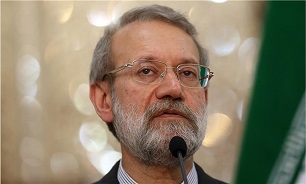 Larijani made the remarks after a trilateral meeting of heads of three branches of power in Iran held late on Wednesday, hosted by the Judiciary.

He pointed to the unveiling of new generation of homegrown centrifuges, and said, "It should be kept in mind that the result of applying this new generation chain can accelerate the country’s pace in the field of nuclear technology."

"The result of application of this chain of new generation of centrifuge will greatly boost our speed in development of nuclear technology and relevant activities,” he added.

After the same trilateral meeting, Iranian President Hassan Rouhani declared that the country will no more abide by restrictions put on its nuclear R&D program based on the nuclear deal as the third step to react to the Europeans' non-commitment to the Joint Comprehensive Plan of Action (JCPOA).

In relevant remarks on Sunday, Chairman of the Iranian parliament's National Security and Foreign Policy Commission Mojtaba Zonnour called on the government to increase the level of its enriched uranium to 20% and install the IR6 and IR8 centrifuges as a third step in scaling down its undertakings under the nuclear deal if the EU failed to do its commitments.

"We can adopt several serious measures in the upcoming third step (to modify nuclear deal undertakings); one of them is continuing the recent increase in the level of enriched uranium from 3.67% to 4.2% in a move to enhance it to the 20% level and develop the necessary deterrence (against Europeans' inaction)," Zonnour said.

He also described increasing the volume of enriched uranium, installation of the advanced IR6 and IR8 centrifuges, restoring work on the construction of Arak heavy water reactor based on its past design, decreasing Iran's inspection undertakings to the level required by the International Atomic Energy Agency (IAEA) rules and suspending the voluntary implementation of the Additional Protocol to the Non-Proliferation Treaty (NPT) as other options before Tehran.

Zonnour underlined the necessity for the government to take multiple steps in the third phase rather than taking one single step every two months, noting that the next step should give Iran the necessary deterrent power against the Europeans' inaction.