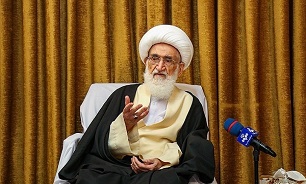 In a meeting with a group of clerics from the Kashmir region, held in the city of Qom on Sunday, Ayatollah Nouri Hamedani said the Muslim people are duty bound to stand firmly against the plots hatched by the enemies, including the British ploys in the Indian Subcontinent and in Kashmir.

"India, Pakistan and Bangladesh were a single region in the past, but they (Britain) split it and created the current situation in Kashmir to let disagreement and split prevail there forever," the top cleric deplored.

Highlighting the Islamic Republic’s support for the oppressed and the battle against the tyrants, Ayatollah Nouri Hamedani called on the people of Kashmir to continue resistance.

"Today, everybody should come to support the oppressed, and people of Kashmir should not give in to humiliation," he added.

In comments on August 21, Leader of the Islamic Revolution Ayatollah Seyed Ali Khamenei called on the Indian government to adopt a fair policy towards the people of Kashmir and avoid harassing its Muslims.

"We have good relations with the government of India, but the Indian government is expected to adopt a fair policy towards the noble people of Kashmir, so that this region’s Muslim people would not be oppressed," Ayatollah Khamenei underlined.

In early August, India's Hindu-nationalist government revoked Article 370 of the constitution, which formed the basis of Kashmir's accession to India and gave the state of Jammu and Kashmir its own constitution and decision-making rights.