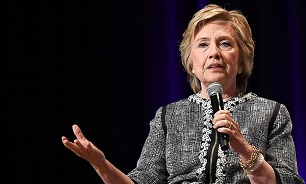 Speaking to CBS, she brought up the recent controversy over the July phone call between Trump and his Ukrainian counterpart Volodymyr Zelensky, in which the former requested a thorough probe into Joe Biden’s son Hunter’s dealings in Ukraine, stressing that among “a number of grounds” for impeachment, “this one is incredibly troubling”.

She branded the incident, which Zelensky referred to as a “normal” average phone conversation, “a blatant effort to use his [Trump’s] presidential position to advance his personal and political interests”.

Clinton, who herself once faced a scandal over her use of a private server during her tenure as secretary of state under former President Barack Obama, then focused on her “hopes” for the future.

"I believe that --- look there were many funny things that happened in my election that will not happen again. And I’m hoping that both the public and press understand the way Trump plays the game,” Clinton noted, drawing a line between her and her Democratic colleague and soulmate Biden.

She suggested Joe Biden, the Democratic front-runner in the upcoming 2020 vote, is repeating her fate, as “the most outrageously false things” were said about her during her presidential campaign.

"I don't care if you're for the [Democrats] or you're a Republican, when the president of the United States, who has taken an oath to protect and defend the Constitution, uses his position to in effect extort a foreign government for his political purposes. I think that is very much what the founders worried about in 'high crimes and misdemeanours,'" Clinton explained at length, branding Trump “a direct threat and a clear and present danger to the rule of law”.

When asked if POTUS’s calls to “lock her up” really anger her, she shook her head, arguing it “doesn’t kill me”, “because I know he’s an illegitimate president”.

“I believe he understands that the many varying tactics they used, from voter suppression and voter purging to hacking to the false stories ... there were just a bunch of different reasons why the election turned out like it did," she added, reiterating her usual swipe at Trump’s campaign, before offering a highly metaphorical comparison.

"It was like applying for a job and getting 66 million letters of recommendation and losing to a corrupt human tornado," she stated.

The latest dust-up between Trump and the Democratic camp occurred after a whistle-blower from the CIA ranks, according to The New York Times’ Thursday report, handed in a complaint over the president’s phone conversation with Zelensky, part of which was released as a transcript.

In it, Trump suggested the Ukrainian president should even cooperate with his own personal lawyer in investigating the corruption allegations over Hunter Biden as well as Joe Biden. Trump's request focused on a move Joe Biden made in early 2017, when the then-outgoing vice president threatened to withdraw aid flowing to Ukraine unless the country fired Chief Prosecutor Viktor Shokin, who was at the time investigating a Ukrainian company that employed Biden’s son.

In the footsteps of Clinton, House Speaker Nancy Pelosi alleged that Trump's request to the Ukrainian president to probe Biden is a green light to intervene in the US election and may constitute a breach of his constitutional responsibilities – a fact that underpins an ongoing impeachment attempt labelled by Trump as “hoax” and a “witch hunt”.