TEHRAN (defapress) – Deputy Commander of the Islamic Revolutionary Guards Corps (IRGC) Rear Admiral Ali Fadavi said on Friday that “enemies are aware of the Islamic Republic’s deterrence power and know that negative consequences of any aggression to Iran is more than its benefits.”
News ID: 78826 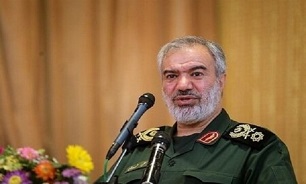 “Today, the Islamic Republic is improved in the field of military equipment and human resources,” he said, “One of the factors deterring enemy invasions is the faith of Iranians and their obedience to the Leader.”

“In recent years, the Resistance Front has been able to defeat enemies in Syria, Iraq, Yemen, and Gaza,” he noted.

Describing Iran’s military power as ‘impenetrable’ and ‘undefeatable’, he said “the deterrence power of Islamic Iran is built on the basis of overcoming major enemies,” adding, “with Allah’s help, we will be readier than ever to defend the territorial borders, independence and the territorial integrity of our country through enhancing this [deterrence] power.”

The top IRGC commander further noted that the enemies have already seen the capabilities of Iran’s military equipment, adding that they will come to realize Iran’s real power on the battlefield.